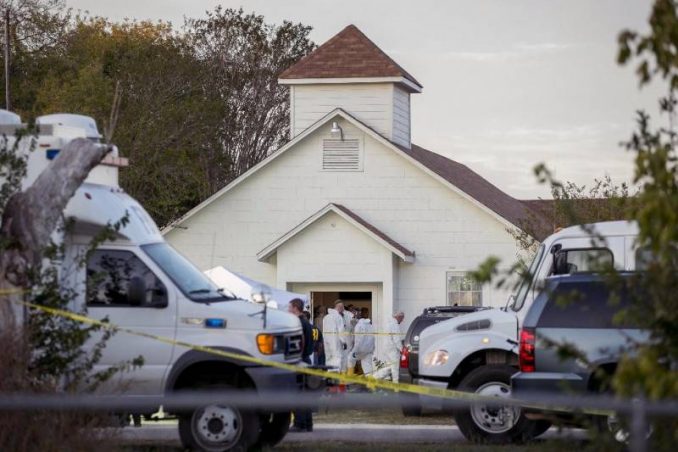 A small town and a national tragedy. Twenty-six people have been killed in a small church in rural south Texas.

Sutherland Springs is a quiet town about 30 miles south of San Antonio. It also happens to be extremely close to my own hometown of Floresville. Nine of the victims are Holcombes, who also happen to be kin to my best friend of more than 10 years.

According to Gun Violence Archive, there have been 308 mass shooting incidents reported and verified this year alone in the U.S. as of Nov. 5, the date of the Sutherland Springs shooting. (gunviolencearchive.org)

‘Symptom of the disease of capitalism’

Where do we go from here? We live in a country that glorifies violence in the media, in our pop culture and even in some of our popular religions. Two questions come to mind when pondering this horrific but, sadly, not surprising tragedy.

Why is this happening in the U.S.? What can we do about this uniquely U.S. problem?

As per usual, the media talking heads, as well as political puppets, are the first on the case to place blame anywhere they can: mental illness, movies, video game violence, an overabundance of guns, and so on. There is no subtlety to their solutions. Failing to recognize the complex character of these events, they seek to place a bandage over a proverbial bullet hole.

Capitalism promotes a culture that is completely devoid of meaning and care for each other. That leaves us to process so many of these tragedies on our own or through the mainstream media, which serves only to benefit the ruling classes. Capitalism is characterized by the senseless violence inflicted on its victims, whether through the wage-slave labor it creates or the mass shooters in its very belly. We have been victimized by the very system that is supposed to be taking care of us.

While the world will move on to the next thing, the families of these 26 people are left to pick up the pieces of their shattered lives. We must ask ourselves: What drives a person to commit such acts? Does this really have to do with how many guns are around? Or is this a deeper symptom of the disease of capitalism.

This culture of emotional isolation is derived from a competitive economic system that pits worker against worker and refuses to provide the care necessary for a society to function properly. Instead, we are rewarded for ruthlessness; our selfishness is praised as the “American” virtue most desirable of all. Obeisance to all of this is deemed patriotism. We are forced to work endlessly at jobs we don’t want and to pay for things we cannot afford but which are actually necessary, like health or car insurance.

Capitalism has no mercy for those that are suffering — whether physically, emotionally and/or spiritually. It will continue to pump out mass murderers, another commodity it can profit from. This time, the profits come from tragedy and ratings.

What can be done?

We have seen time and time again that the U.S. government is unwilling to do anything of any significance to help understand why this is happening, let alone anything to stop it.

Workers World Party does not say that disarming the general population is a necessary or desirable action. Most importantly, the capitalist socioeconomic system needs to be dismantled. Its long list of abuses against the world is very apparent.

How can we expect a stable society when nearly 82 million people in the U.S. have inadequate or no health coverage? And that number is continually rising. When the U.S. has some of the worst maternity leave policies among all the developed nations? When the U.S. ranks in the top 10 countries with the highest rates of depression and anxiety? When the U.S. has invaded 10 different countries in the last 30 years?

Let us be clear: The United States has created an empire based on the exploitation of the labor and resources of other countries and of its own population. It has created a toxic environment that glorifies war and violence while simultaneously feigning utter amazement at the mass shooter phenomenon.

The government sends soldiers to kill and die in foreign countries for profit and power without a second thought about how it is affecting the families who live in those countries. However, when we witness a tragedy such as the Sutherland Springs shooting on U.S. soil, human life supposedly has meaning again.

We must continue to fight against the unrelenting and uncaring monstrosity of capitalism. We must fight to create a better, more caring world for everyone. A world where tragedies like this are not and should not be the new normal.

If you would like to help the Holcombe family through this horrific time, you can make a donation at gofundme.com/texasshootingfamily.