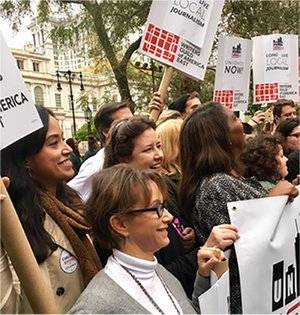 Staff reporters and editors at news websites DNAinfo and Gothamist celebrated a union victory after voting to join the Writers Guild of America, East on Oct. 26. But that victory was short-lived.

The struggle originated in New York when 25 editorial staff voted to join WGAE, with only two dissenting votes. The vote was conducted under the supervision of the National Labor Relations Board. Then the real fight started.

Owner Joe Ricketts shut down the websites on Nov. 2. As a result, 115 employees, including sales, office and technical workers in New York and at the sites’ sister publications in Chicago, Los Angeles, San Francisco and Washington, were laid off. Ricketts also removed the sites’ online content. That hindered the news staff’s ability to apply for future jobs because their portfolio items were inaccessible to potential employers.

The callous moves on Boss Ricketts’ part were excused by the greedy capitalist talking point: “the bottom line.” Ricketts is the founder of TD Ameritrade, owns the Chicago Cubs and donated $1 million to Donald Trump’s presidential campaign. He said in a public statement: “At the end of the day, a business is a business, and businesses need to be economically successful if they are to endure.” He unsuccessfully argued that “business wasn’t sufficient to continue.” (New York Times, Nov. 2)

Gothamist journalist Scott Heins countered Ricketts’ claim: “The union drive did not kill Gothamist and DNAinfo. We did not even get a chance to make it to the bargaining table. Joe Ricketts made the decision to shut this down before we even got to present a list of demands.” (Labor Press)

Despite his rhetoric, it is clear that Ricketts, who once wrote the editorial “Why I’m Against Unions at Businesses I Create,” wanted to punish his staff for organizing a union.

In response, WGAE hosted the “Rally to Support DNAinfo and Gothamist” at New York’s City Hall Park on Nov. 6. At the gathering, more than 300 people joined the “fight against the billionaire war on journalism.”

A victory came on Nov. 13 when the DNAinfo/Gothamist bargaining committee, led by WGAE, announced they had negotiated “an agreement that includes substantial gains beyond the initial offer made by management.” The terms of agreement for all the laid-off workers include what amounts to four months’ severance pay with full benefits. And the writers have the right to use their published work and to create new work based on that. There was no nondisparagement clause. (WGAE press release)

After outrage and outcry, the writers’ articles have been archived online. WGAE’s Director of Communications Jason Gordon told Workers World, “We are having conversations about maintaining availability in the future. The union committee has made it clear that this is important, and I believe management understands.” Ricketts’ company also confirmed in writing that it “will not remain in business” and will not “create any neighborhood news media website for at least two years.”

WGAE’s Executive Director Lowell Peterson stated in the release: “The reporters at DNAinfo and Gothamist stayed strong despite the vocal hostility of management (especially owner Joe Ricketts), and their solidarity proves the value of collective bargaining. They identified the real needs of the entire unit and achieved the best shutdown agreement possible under the circumstances.”

Peterson added: “We have learned the importance of building a collective voice in digital media. And we have learned how important it is not to permit ideologically driven billionaires to control our media.” As the DNAinfo/Gothamist bargaining committee also noted in the release: “[W]e hope that our experience underscores the importance for writers and journalists everywhere to unite and stand up for their rights.”

This struggle highlights how union busting conducted by the capitalist billionaire class is an assault on the right to organize, as well as on freedom of the press and free speech.