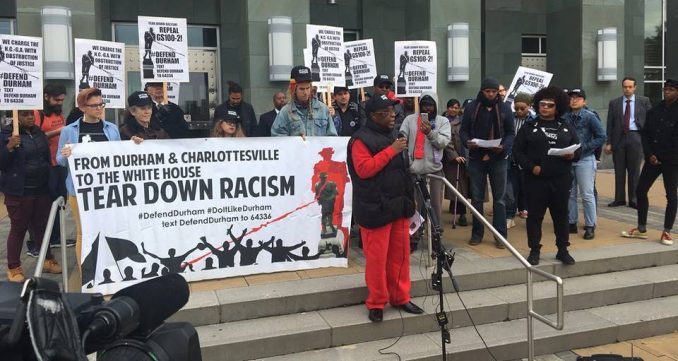 Two days following the “Unite the Right” white supremacist gathering in Charlottesville, Va., the people of Durham, N.C., took bold action that reminded the anti-racist movement that the real power is in our hands.

Hundreds gathered on Aug. 14 in front of the old courthouse in downtown Durham to show solidarity with the Charlottesville community who had been terrorized and injured, left to mourn the killing of ­anti-fascist activist Heather Heyer.

By the end of the evening, the Confederate monument erected “In memory of the boys who wear the gray” had fallen to the ground — toppled and crumpled under the revolutionary fervor of people from all over the city. The days that followed this righteous monument takedown saw racist statues being removed and defaced all across the country.

In Baltimore, the city elected to remove all four Confederate monuments in the early hours of the morning. In Durham, just down the street from the courthouse, on the campus of elite Duke University, a statue of Robert E. Lee was removed by the administration. From Brooklyn, N.Y., to Austin, Texas, Boston to Birmingham, Ala., and all cities in between, local governments witnessed and had to answer to the power of the people who demanded that relics of white supremacy no longer be protected and preserved.

But in Durham it didn’t just stop with the people’s removal of the racist monument. On Aug. 18, when there were threats of yet another white supremacist rally there, thousands flooded the streets to run the white supremacists out of town.

Flood of support for anti-racist activists

Masses of people demonstrated at the former site of the toppled statue for hours, declaring it “Victory Square.” Many who showed up in the heat of that Friday afternoon were working-class Black and Brown people who have been steadily pushed out of center city and the public sphere — subjugated to subpar “low-income” housing, the development of a new $71 million police headquarters, and the unending surveillance of police and Immigration and Customs Enforcement agents.

Since Aug. 14, numerous arrests have been made by the sheriff’s department in an attempt to repress and intimidate the anti-racist movement in Durham that is helping to ignite action across the country.

But at every turn, when the sheriff’s department and puppet politicians demanded the people get back, we have boldly continued the fightback. Thousands signed online petitions demanding that the charges against Durham arrestees be dropped. Youth and students all across the country, on numerous campuses, participated in a widely endorsed national Day of Action to Topple White Supremacy on Sept. 12 when Durham arrestees returned to court to face felony and misdemeanor charges.

Because of this show of power and outpouring of solidarity, all charges were dropped against three of the arrestees, Aaron Caldwell, Myles Sprignor and Taylor Cook, who expressed continued solidarity with the remaining arrestees and the broader struggle to tear down white supremacy.

Though charges still remain against nine arrestees for the actions on Aug. 14 and against three arrestees who aided community self-defense on Aug. 18, the Durham defendants are still showing up strong and with plenty of community backing.

At the most recent court appearance on Nov. 14, the Durham community organized a powerful rally and press conference that drew speakers and statements of solidarity. Among the speakers were former mayoral candidate Pierce Freelon, Rafiq Zaidi with Inside-Outside Alliance, Reverend Curtis Gatewood with Stop Killing Us, Elijah Pryor with Changing Colors Changing Lanes, and Laila Nur with Durham for All. Solidarity statements were read from Jewish Voice for Peace-Durham and Durham’s People’s Alliance. A member of the Durham Human Relations Commission, which passed a resolution in support of dropping felony charges against the arrestees and removing all statues and memorabilia paying undue homage to the Confederacy, was there.

Leading up to the rally was a national call-in day organized by the NC Public Service Workers Union, United Electrical Workers Local 150, calling on labor and all those on the side of justice to flood the phone lines of District Attorney Roger Echols to demand that all charges be dropped. Hundreds of people called in and also called upon North Carolina Senate President Berger to repeal the law General Statute 100-2, passed in 2015 to prevent local governments from removing Confederate monuments.

Though charges still remain against the Durham freedom fighters, the movement has progressed by leaps and bounds in the past several weeks with anti-racist organizers putting up a tireless battle against the state and its racist sense of “justice.” The movement has won by its refusal to back down — whether it be to elected officials and sheriffs or to white supremacist vigilantes.

A people’s victory, a People’s Tribunal

District Attorney Echols has informed the arrestees’ lawyer that he will not proceed on the felony charges. However, he has not formally dismissed the charges, and when asked by the press for information, he has refused to say that he is dropping the charges.

Regardless of the legal formalities and the district attorney’s hesitance to choose a side, we claim victory! The consensus is clear from all across the country: It is not a crime to tear down white supremacy. We will not stop until all charges are dropped.

The arrestees also announced on Nov. 14 the formation of a Durham People’s Tribunal and Commission of Inquiry to launch an independent investigation into the real crimes being committed in Durham.

The tribunal will challenge the crimes by the state’s General Assembly, by the sheriff’s department and by other state actors who thwart the will of the people and act to enshrine and preserve white supremacy and to aid this murderous system in its perpetual aim toward profit and wealth for the few, at the cost to and death of the entire working class.

The initial tribunal charges brought against the General Assembly and the sheriff’s department, in reply to charges faced by Durham arrestees, include: obstruction of justice and conspiracy, because the General Assembly and its elected officials passed G.S. 100-2 to thwart the will of the people; collusion, when the sheriff’s department and elected officials pursue actions that result in continued terrorism of communities of color, like the General Assembly allowing reactionary think tanks to draft legislation to profit off the exploitation of poor communities of color; and negligent homicide, to hold Sheriff Mike Andrews responsible for the numerous deaths in the Durham County Jail.

On the side of justice and liberation

If the actions of the past several weeks have taught the anti-racist movement anything, it is that when oppressed people are confronted with opposing sides of history, they will choose the side of justice and liberation; the side which serves the real needs of all humanity and does not prioritize the greed of a small handful; the side which allows the working class to be the true arbitrators of what constitutes a crime; the side which demands that those who dominate through the misery of our class should start counting down the days to their removal from posts of power.

The struggle continues in Durham and across the country, not just for the removal of racist statues but for the complete destruction of white supremacy and all its chokeholds under the capitalist system.

The movement will not stop until all charges are dropped; all monuments to racism have been removed; all people are able to live without fear and repression. We will continue to claim victory for the thousands who have taken to the streets; for the bold leadership of LGBTQ youth, women, people of color and the entire working class; for uniting our class to say that “enough is enough” and that Heather Heyer’s death and the brutalization of our freedom fighters have not happened in vain.

Drop the charges! Tear ‘em all down! Black Lives Matter! No justice, no peace, no racist police! The whole damn system is guilty as hell!