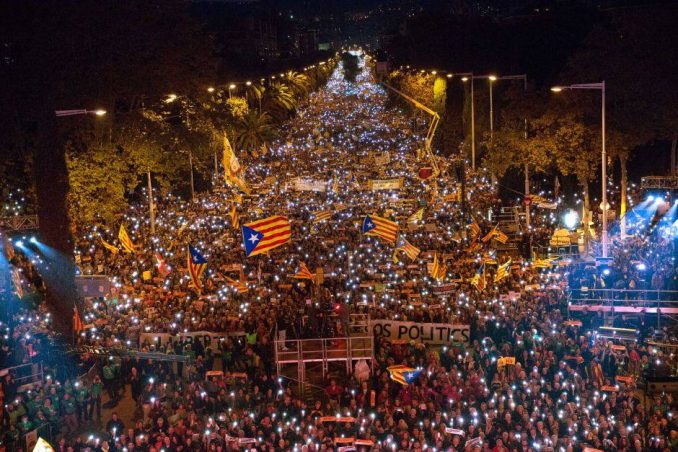 Some 750,000 people took to the streets of Barcelona on Nov. 11 to demand the release of Catalan pro-independence political prisoners jailed by the Spanish regime in mid-October. The march also demanded an end to the Spanish takeover of the regional Catalan government.

Jordi Sànchez, chairperson of the Catalan National Assembly, and Jordi Cuixart, head of the cultural association Òmnium Cultural, have been imprisoned since Oct. 16. The “two Jordis” are charged with “rebellion” for organizing massive peaceful demonstrations to defend an Oct. 1 referendum on independence from reprression by the Spanish state.

Another eight ministers of the Catalan government, which the central Madrid government deposed by decree on Oct. 27, have also been charged with sedition and misuse of public funds — funds they used for carrying out the referendum.

The latest mass protest in Barcelona, coupled with a general strike and militant protest earlier that week, which stopped much of the rail and road traffic in the region, showed that the struggle for self-determination of Catalonia is still deep in the hearts of a large part of the population.

In addition, whether in an independent Catalan republic or as part of the imperialist Spanish state, the workers of Catalonia will still be subject to the bosses’ attacks on their wages and social benefits. Since the 2008 worldwide capitalist crisis, Catalan’s working class, just as the workers in the rest of Spain, have been hit by massive unemployment, wage cuts and cuts in pensions, health care and education.

The deposed president of Catalonia, Carles Puigdemont, and four of his ministers have been in Brussels, the capital of the European Union, since Rajoy’s government brought charges against them. Puigdemont’s party, the European Democratic Party of Catalonia (Pdecat), has opted to take part in the Dec. 21 elections, even though the Spanish state is imposing the elections on the region.

Puigdemont says he has chosen to run the campaign from Belgium rather than going back to Catalonia and being arrested. Another of the pro-independence parties, the Republican Left (ERC), has also opted to run in the elections. Unlike in the last elections, in which a joint pro-independence slate won a small majority in the assembly, the ERC says it will run separately on Dec. 21.

Both the Pdecat and the ERC are pro-capitalist parties. They appeal to the European Union, even though the EU leaders have, up to now, sided with the Spanish state. An independent Catalonia, subject to the economic domination of EU imperialism and NATO membership, would do nothing to relieve the economic hardships of the Catalan working class.

Meanwhile, Rajoy is attempting to stir up even greater chauvinism among those in all the regions who identify as Spanish. In the past decade especially, the PP, the PSOE, the monarchy and big business have all been exposed as corrupt exploiters. As expected, the last refuge of these scoundrels is Spanish patriotism and nationalism.

The enemy of all the workers of the Spanish state — whether they identify as Catalan, Basque, Galician, Castilian or another nationality — is the imperialist ruling class and its parties running the Spanish state. That means mainly the PP and PSOE, the parties that have alternated in ruling over all the peoples of Spain since the 1978 “Transition.”

For working-class revolutionaries, the most important goal is to build solidarity among the workers of all nationalities. The only way to do this is to support the self-determination of all the peoples in the Spanish state. This was a cornerstone of the united front since Spain’s 1936-39 Civil War.

In the Puerta del Sol plaza in the center of Madrid, a demonstration on Nov. 5 called by the Marches for Dignity and the S25 Platform denounced “the latest judicial actions taken against independentist political leaders” and defended the Catalan Republic.

Before more than a thousand people, Ángeles Maestro, speaking for the Marches for Dignity, said that support for the Catalan people is not only a question of solidarity but of struggle against common enemies, including the PP, the PSOE, the Citizens’ Party and “the monarchy, the legislature and the court system and all the machinery that continues the heritage of the [Franco fascist] dictatorship.”

Maestro ended by underlining “the absolute necessity of unity of all the peoples of the Spanish state against the Regime of 1978, that each people can’t do it alone, so there is a need to support each other in the historical memory of the anti-fascist resistance that raised the cry of ‘They shall not pass,’ that the struggle of the peoples has made their own, as the Catalans have now.” (lahaine.org, Nov. 5)