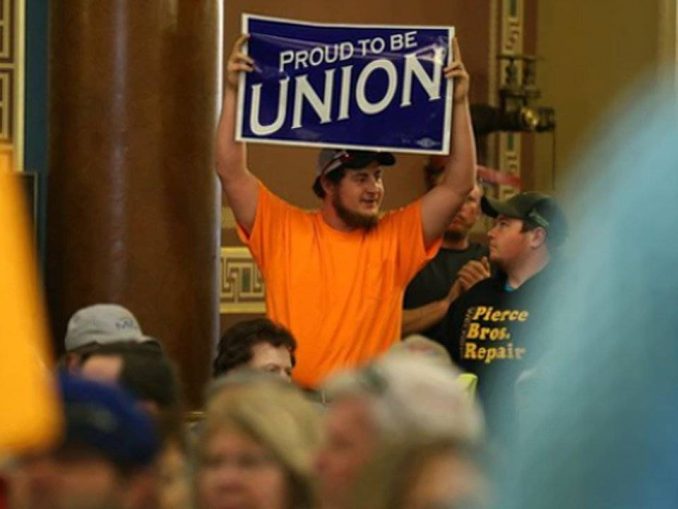 Public unions in Iowa, forced by a new anti-union law to hold recertification elections Oct. 10-24, won an overwhelming 93 percent victory. Of 33,252 eligible voters, 28,448 voted to retain their unions, with only 624 ballots in opposition. Of 468 elections statewide, unions won 436 and lost only 32, announced the Iowa Public Employee Relations Board on Nov. 8.

Eric Larew, past president of the Pleasant Valley Education Association, told the Quad City Times that the high margin of victory was “probably” in reaction to undemocratic rules. Instead of requiring a majority of those voting, all those not voting were counted as “no” votes. Calling it a “sweeping victory,” Danny Homan, president of American Federation of State, County and Municipal Employees Council 61, said it confirmed that even non-union members “value their voice in the workplace.”

The law was approved in February by former Gov. Terry Branstad and the Republican-led legislature. It severely limits the number of issues public workers, except most public safety employees, can negotiate and stipulates the new recertification rules in the final months of contracts. Union officials have protested the law, asserting it was rigged against unions, and are challenging it in court. (qctimes, Nov. 9)

Victory against outsourcing at UTenn

Workers at the University of Tennessee just won a significant victory. The United Campus Workers, an affiliate of the Communications Workers union, defeated a $300 million outsourcing scheme that would have ripped 1,700 custodial, repair and maintenance jobs from the community.

The deal was a flop from the start. A student-organized comparison of the current contract and the proposed contract discovered costly overruns in the latter. CWA’s path to victory was uniting labor, community and business allies with students, staff and faculty, and educating lawmakers about the flawed proposal.

Though other recent union drives in the South have been defeated, Payday Report notes: The UCW win is “a sharp rebuttal to those who say it’s impossible to win victories in the anti-union South. … [P]ublic sector unions … can continue winning victories by building community alliances and mobilizing their members to put pressure on lawmakers.” (Nov. 1)

A heroic union drive at Santander Bank, led by the Communications Workers, is gaining steam. CWA is trying to unionize tellers, bankers and call center staffers in the U.S. arm of Spain’s global giant, Banco Santander. This is a vital struggle, not only because of its impact on the workers’ livelihoods, but also because it could shed light on the bank’s dirty deeds in Puerto Rico.

Santander’s no ordinary bank. Here in the U.S., Santander Consumer USA has spent years since the Great Recession buying up debts and now controls a third of that market. But the bank faces a series of regulatory actions after failing to comply with national consumer protection laws. (Boston Globe, March 28)

In Puerto Rico, former head of Santander PR Carlos Garcia became head of the Puerto Rico Government Development Bank in 2009. There he misappropriated enough funds to send the bank into insolvency! This only exacerbated the island’s massive $74 billion debt. Now Garcia heads PROMESA, the fiscal board overseeing the privatization and pillage of Puerto Rico. (For an expose of Santander and Garcia’s crimes, see WW article, “Santander Bank owes reparations to the Puerto Rican people” by Berta Joubert-Ceci, March 28, tinyurl.com/ycxxonsg/.)

With Puerto Rico continuing to suffer from federal mismanagement and racism after the hurricanes, unionizing the workers at Santander USA would be a small step toward justice in the island nation.

Kroger grocery workers in 39 stores in West Virginia, Ohio and Kentucky voted overwhelmingly to ratify a new contract on Nov. 6. The contract for 4,200 members of Food and Commercial Workers Local 400, which takes effect immediately and runs through Aug. 29, 2020, provides raises while maintaining health care and retirement benefits.

“These days, it is extremely rare to ratify a contract without losing a single benefit,” said Local 400 President Mark Federici. “I cannot overstate how much the support of Kroger customers and the rest of the community made a difference in these negotiations.” Allen Nuckels, a clerk from Oak Hill, W.V., added: “I lost count of how many times someone saw us at a rally and stopped to ask me, ‘Are you guys on strike? Because I won’t cross a picket line!’” (dclabor.org, Nov. 7)