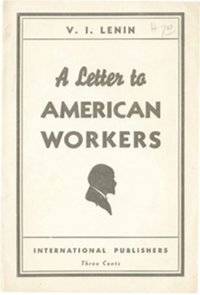 Russian revolutionary leader V.I. Lenin’s “Letter to American Workers,” written in 1918, stressed the role of the U.S. working class in the ongoing global struggle against oppression. It contains important lessons for workers on the 100th anniversary of the October Revolution.

The Bolsheviks established the first workers’ state in Russia on Nov. 7, 1917, and pulled the country out of the imperialist slaughter of World War I. Surviving revolution, civil war and foreign invasion, the Russian Soviet Federative Socialist Republic (later the Union of Soviet Socialist Republics) ended Czarist rule in the Russian Empire — “the prison house of nations.” It was under these conditions that Lenin’s letter was written.

The story of the document’s creation and publication is nearly as interesting as the letter itself. There were rumblings of revolution in the U.S. even before its entrance into World War I, a global catastrophe accompanied by anti-labor violence and anti-union crackdowns on the home front.

The Shilka, a former Czarist naval vessel, arrived in Seattle harbor on Dec. 21, 1917. The ship had left Russia before the Bolshevik revolution and the sailors were excited to hear about the victory of the Soviets. U.S. workers greeted their Russian comrades when the ship docked in Seattle.

American journalist Anna Louise Strong, in her 1935 memoir “I Change Worlds,” reported the following: “The vessel left Russia under the rule of Kerensky; it arrived in our port in the era of Bolshevik rule. Somehow a soviet of workers had been elected on board the ship under which the captain functioned. This caused some consternation among Seattle Port authorities.”

The sailors were arrested and the ship raided by the police. They were freed after protests from the Industrial Workers of the World, the AFL-CIO and other allies of organized labor. The Shilka left on Jan. 8, 1918, carrying a letter co-written by lumberjack Roy Brown and other Seattle I.W.W. leaders. The document, describing the conditions confronting the U.S. working class, was hidden in a life-belt by Commissar Nikolai Kryukov.

The letter was addressed, “To Nicolai Lenin and the Representatives of the Bolshevik Government, and through them to the Workers of Russia.” In this document, the Seattle workers declared “there is no such thing as freedom of press, freedom of speech in the U.S.,” calling the democracy boasted by capitalists “a trap.” They also expressed their solidarity with the workers of revolutionary Russia: “Your struggle, in its essence, is our struggle. Your victory is our victory. And your defeat will be a blow to us.”

Lenin referred to the American Revolutionary War and the Civil War as “liberating wars of which there have been so few compared to the vast number of wars of conquest which, like the present imperialist war, were caused by squabbles among kings, landowners or capitalists over the division of usurped lands or ill-gotten gains.”

One of those who demonstrated this kind of solidarity was the Socialist presidential candidate Eugene V. Debs, who was jailed for opposing U.S. involvement in WWI. Debs had told a crowd in Canton, Ohio: “The master class has always declared the wars, the subject class has always fought the battles. The master class has had all to gain and nothing to lose, while the subject class has had nothing to gain and all to lose — especially their lives.”

Being knowledgeable about U.S. history and the struggle between classes, Lenin said he was not surprised that the so-called liberal President Woodrow Wilson, “the head of the American multi-millionaires and servant of the capitalist sharks,” imprisoned Debs under the Espionage Act of 1917. The law was passed during what became known as the First Red Scare, to intimidate workers from revolutionary activities.

The radical journalist John Reed, author of “Ten Days That Shook the World,” an eyewitness account of the Bolshevik Revolution, secured the publication of Lenin’s letter in the U.S.

The letter became an influential document in socialist and communist circles. International Publishers founder Alexander Trachtenberg wrote, “It played an important part in developing among American Socialists an understanding of the nature of imperialism, of the aims of the October Revolution and of the role of social-chauvinists in the labor movement.”

Many lessons contained in this largely forgotten document are still relevant to revolutionary workers for the struggles that lie ahead. As Lenin concluded, “In short, we are invincible, because the world proletarian revolution is invincible.”

Lenin’s “Letter to American Workers” can be read at marxists.org.