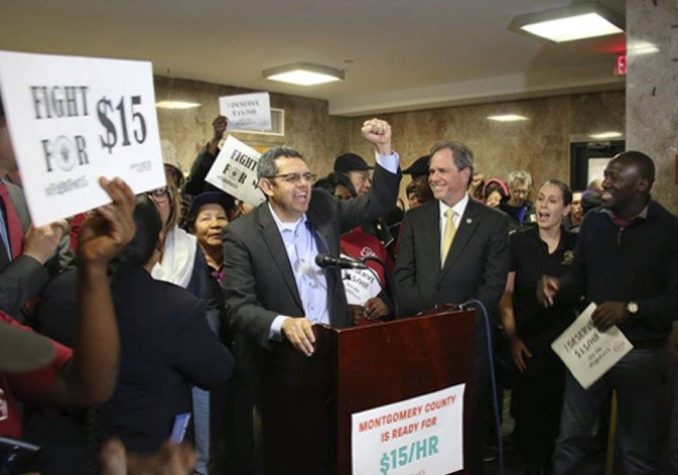 Rockville, Md., Nov. 7 – Chants of “¡Sí, se puede!” and “Yes, we can!” rang out loudly here today in Montgomery County Council chambers and throughout the halls. Cadenced applause accompanied the chants as an overflow crowd of workers packed the auditorium to witness the fruition of years of struggle.

The council unanimously voted to pass a $15 per hour wage bill.  It is now sitting on County Executive Isiah Leggett’s desk, waiting to be signed. He  had vetoed a bill in January that provided for a faster rise to the $15 hourly pay rate, a bill which was opposed by business owners.

The law that just passed mandates that the larger employers – those with 51 workers or more – would pay the $15 hourly wage by July 1, 2021. Bosses who employ 11 to 50 workers would have until July 1, 2023, to pay this rate, and those with 10 employees or less would have another year to reach it.  This legislation includes an annual increase in the minimum wage based on the Consumer Price Index, beginning on July 1, 2022.  The federal minimum wage law, which has been frozen at $7.25 since 2009, has never included an automatic cost-of-living provision.

A joyous, raucous rally followed the win in the council.  There, minimum-wage earners told of their struggles to survive.  Solidarity statements were made by supporters from CASA de Maryland, an immigrant rights group, as well as Service Employees Local 32BJ and Food and Commercial Workers Local 400. Speakers called on these activists to go “On to Annapolis [the state capital] to pass $15/hour statewide!”

Joining in were individuals and members of organizations that have come out consistently to similar rallies and hearings for years. The supportive groups included Jews United for Justice, Working Families, and Food and Commercial Workers Local 1994.

This victory was the result of much struggle by workers, unions and their supporters against the resistance of retailers and restaurant and other business owners – in one of the richest counties in the U.S. It shows that even in the age of Trump, gains can be won.

Leibensperger is a steward with Food and Commercial Workers Local 1994.