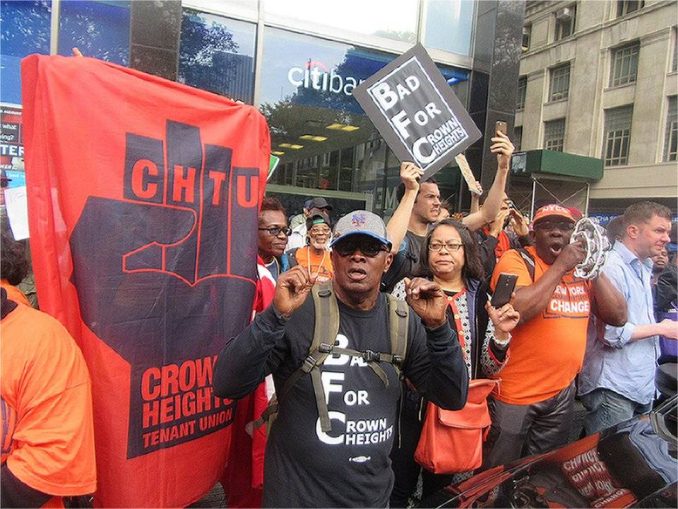 For many, this demand is three years old since their struggle to demand affordable housing at Brooklyn’s Bedford-Union Armory. This is city property, which the community demands be 100 percent affordable.

The developers, BFC Partners, anticipate cuts in housing subsidies from the Trump administration’s Department of Housing and Urban Development. Instead of having BFC make all the planned 330 apartments in this Bedford Avenue block site affordable, the city’s planning commission settled for an 80/20 plan. Thus, 67 units are called affordable, 99 units will be priced at $2,203 a month with another 164 units at $3,700 a month, pushing nearly all local residents out.

Protesters marched to the office of their City Council member now responsible for the next step in making sure the armory is 100 percent affordable. Since an Oct. 30 vote, NYC’s Planning Commission will allow BFC Partners to increase the number of market-priced units. Council member Laurie Cumbo and Mayor Bill de Blasio, who for years have failed to denounce the displacement of low-income tenants, get the next say in the future of the armory.

As today’s protest marched near city Councilwoman Cumbo’s office, it broke into the street. Chants became “Whose street? Our street!” Soon the New York Police Department broadcast orders for all to leave the streets or face arrest.

Ten marchers stood their ground to the cheers of others present. Green Party candidate Jabari Brisport was among those who were soon arrested. He and Joel Feingold had already been arrested at last week’s vote by the planning commission! Brisport had campaigned against Cumbo in the last election for City Council.

Most working-class New Yorkers now ask, “Affordable for who?” to New York Mayor Bill de Blasio and other politicians they consider sellouts to the real estate industry. These politicians boast that they have made developers agree to having a small portion of new housing “affordable.” This, although even the subsidized rent for allegedly affordable apartments is far higher than can be afforded on the community’s average incomes.

The working class of Crown Heights sees how capitalism doesn’t work and says, “Kill the deal!”