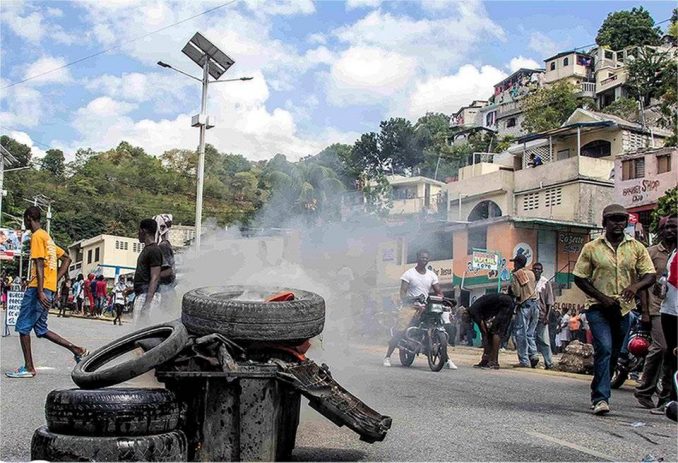 Burning tires during protest in Port-au-Prince, capital of Haiti.

A series of militant demonstrations took place throughout Haiti in September and October. At first, the target of the protests was the new budget that President Jovenel Moïse imposed, raising taxes and fees. This would even apply to Haitians living abroad. When it became clear that the budget would not be modified, the most common demand in opposition was to call for Moïse’s resignation.

Both the Lavalas Family Party (FL) of former President Jean-Bertrand Aristide and the breakaway Dessalines Children Platform (PPD) of Moïse Jean-Charles have played leading roles in many of these protests. It appears that a very loose grouping, the Coalition of Democratic Organizations (COD), has been issuing calls for the protests.

Even when Haitian police called off a protest, alleging there had been some violence, probably caused by provocateurs at a previous protest, people still came out to the demonstration called by the COD.

In October, the COD called for several protests in Port-au-Prince, as well as Petit-Goâve, Saint Marc, Cayes, Jacmel, Cap Haïtien and Ouanaminthe on October 5, 7, 10, 12, 14 and 17. (www.loophaiti.com)

The Moise government has stepped up repression against the protests and attempted to bring out its supporters in the Bald-Headed Haitian Party.

Haiti’s top officials have also asked the U.S. Department of Homeland Security to extend the Temporary Protected Status for another 18 months for Haitian immigrants living in the U.S. They would have to leave this country by Jan. 22 if an extension is not granted.

Government leaders in Haiti say they are reluctant to have another 50,000 immigrants coming from the U.S. and “dumped” in their airports. They cite already-existing problems of absorbing Haitians being expelled from the Dominican Republic, mostly agricultural workers — a policy which has been strongly opposed by Haitians.

Haiti’s officials say the country is still recoving from recent hurricanes and the horrendous 2010 earthquake, making it harder to absorb more people. They also state that the monetary remittances from Haitian workers in the U.S. to family members in the Caribbean island are very much needed.

U.S. imperialism is largely to blame for the impoverishment in Haiti, having super-exploited the country’s workers and plundered their resources for years. Haitian immigrants should be allowed to remain in the U.S. if they choose, and U.S. companies should pay living wages to those workers living here and those living in their homeland.