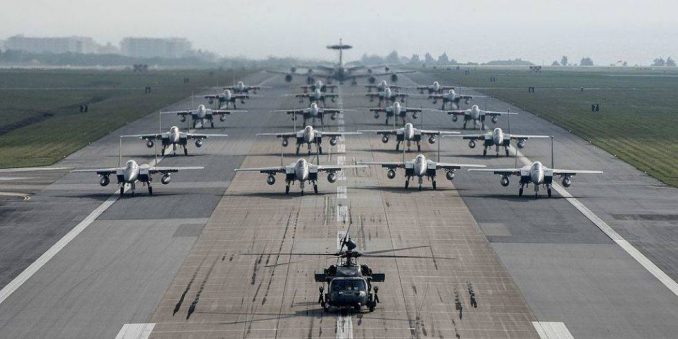 The United States Air Force at Kadena Air Base, Okinawa. The 18th Wing stationed at Kadena is the largest combat-ready wing in the Air Force, operating two squadrons of F-15 Eagles as well as HH-60 Pave Hawks, E-3 Sentries, and KC-135 Stratotankers.

Nov. 7 — Crude, clumsy and a thorough-going capitalist — that was U.S. President Donald Trump at work this week on his tour of Asian countries. Trump the arms merchant pushed the main product the U.S. offers the world these days — high-tech weaponry.

Standing next to Japanese Prime Minister Abe in Tokyo, Trump the salesman virtually commanded him to take military action against the Democratic People’s Republic of Korea. And then Trump placed the arms order himself, declaring: “[Abe] will shoot [DPRK test flights] out of the sky when he completes the purchase of lots of additional military equipment from the United States. The prime minister of Japan is going to be purchasing massive amounts of military equipment, as he should.” (New York Times, Nov. 6)

Trump referenced recent tests of unarmed conventional missiles by north Korea, some of which passed harmlessly over the Japanese island of Hokkaido. Facing U.S. threats that could become U.S. aggression in an instant, the DPRK continues to test both nuclear and conventional weapons.

That should be no surprise. The 1950-53 U.S. war on the Korean peninsula never ended with a peace treaty; U.S. troops, ships and planes encircle the DPRK, including 40,000 troops in Japan itself; the Pentagon possesses almost 7,000 nuclear warheads; and Trump threatened in his first U.N. speech on Sept. 21 to “totally destroy North Korea.”

Trump also tried to flim-flam U.S. workers to sell them militarization: “It’s a lot of jobs for us.”

But Trump was shilling for the U.S. banking-industrial-military complex, not for the few workers employed in this high-tech industry. Of the top 100 arms manufacturers in the world, U.S. companies like Lockheed Martin, Boeing and Northrop Grumman have accounted in the past for more than 60 percent of arms sales revenue and reap billions in profits yearly.

The heads of U.S. high finance and industry might prefer a smoother merchant as the CEO of U.S. imperialism. But Trump shows their true face. They sow misery and chaos with their weapon sales and wars.

The impact of this across the world — from the Korean peninsula to the Arabian peninsula — is devastating. When the U.S. arms the Saudi monarchy against a sovereign Iran, what happens? Iran’s Foreign Minister Mohammad Javad Zari says that U.S.-backed Saudi Arabia wages “wars of aggression, regional bullying, destabilizing behavior and risky provocations” and “bombs Yemen to smithereens, killing 1000s of innocents, spreads cholera and famine.” (NY Times, Nov. 6)