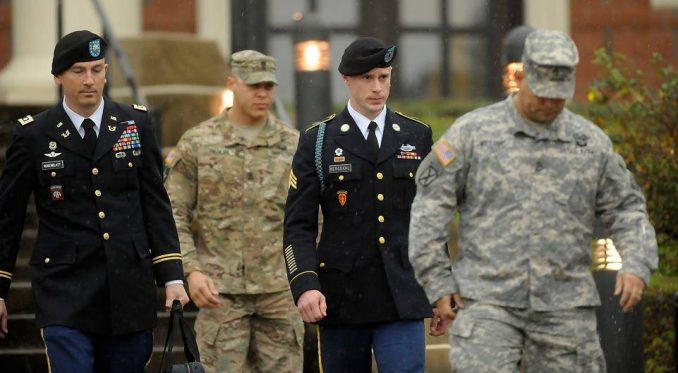 Bowe Bergdahl’s recent sentencing hearing did not address whether he’s guilty or not. Bergdahl had already pleaded guilty, both to “desertion” and to “misbehavior before the enemy.”

A former Army lawyer said this “is the best type of plea to show a defendant is serious about taking responsibility for their misconduct.”

It’s a weird case, and a weirder story.

Bergdahl was held captive by the Taliban for five years, from June 2009 until May 2014. He returned to the United States in May 2014 following a prisoner exchange for Taliban prisoners held at the U.S. detention center in Guantanamo. Bergdahl has been in military custody since December 2014.

At the time of his release, President Obama “embraced Sergeant Bergdahl’s parents in the Rose Garden, and his national security adviser, Susan E. Rice, said the sergeant had served with ‘honor and distinction.’” (nytimes.com, Oct. 23)

Yet during the 2016 presidential campaign, one candidate frequently called Bergdahl a “dirty rotten traitor,” adding that he should be executed: “Bing, bong!” the candidate said as he pantomimed a firing squad. That erstwhile candidate and current president recently reiterated: “They’re setting up sentencing so I’m not going to comment on him. But I think people have heard my comments in the past.” (npr.org, Oct. 23)

The case against Bergdahl has varied since the Army announced he would face a general court-martial on charges of desertion and misbehavior before the enemy. At first the Army’s chief investigator said he believed the most serious charge Bergdahl should face was desertion, which carries a maximum penalty of five years in military prison. Then the Army’s preliminary hearing officer said he endorsed the lead investigator’s recommendation against any jail time.

There was also a finding at one point that Bergdahl should never have been allowed to enlist in the Army at all after being discharged earlier from the Coast Guard. “There just seemed to be a lot of manipulation in this case, all resulting from the political pressure on the Army,” stated a retired Air Force lawyer who is now a law school professor in Los Angeles, in the New York Times article.

Gen. Robert Abrams is now commander in charge of the case. He is the son of Gen. Creighton Abrams, who in 1968 replaced Gen. William Westmoreland as war-criminal-in-chief in Vietnam. The younger Abrams most recently held the title of Strategic War Planner for the Joint Chiefs of Staff, with responsibility for the U.S. Central Command Area of Operations. As such he was a major commander of U.S. operations in both Iraq and Afghanistan.

In the remote case that Abrams might show leniency toward Bowe Bergdahl, Sen. John McCain — former prisoner of war in Vietnam after the plane he piloted was shot down — warned that the Senate Armed Services Committee, which he chairs, would “hold hearings” on the Bergdahl case if there were no punishment. McCain’s committee must sign off on any future promotions for the general in charge of the case.

So Bowe Bergdahl is at the mercy of a cabal of war criminals who seek to blame him for the loss of anyone sent to find him after he left his unit and was taken into Taliban custody. He has testified that he left his outpost in Afghanistan to hike to a larger base to report concerns about problems in his unit. For this at least one person wants him executed, others want him sentenced to life in military prison, and a few seem willing to settle for a mere five years of jail time.

Criminality is a tough call in times of crisis. But this one is easy. Bowe Bergdahl should not be in military custody at all. If anything, he deserves an apology. But the powers that be in this country are not very good at that. They are the ones who deserve to be punished. The haunting question is what punishment could suffice for what they have done, and what they continue to do. In other words, when will true justice be served?

Dee Knight refused to be drafted for the U.S. war against Vietnam and instead lived in Canada from 1968-74. While there he was an editor and organizer with Amex-Canada, the magazine of U.S. war resisters in exile. Amex forged an alliance with Vietnam Veterans Against the War and built the National Council for Universal & Unconditional Amnesty. NCUUA waged a national campaign in defense of all U.S. war resisters. Knight served on the NCUUA board from 1971-76.