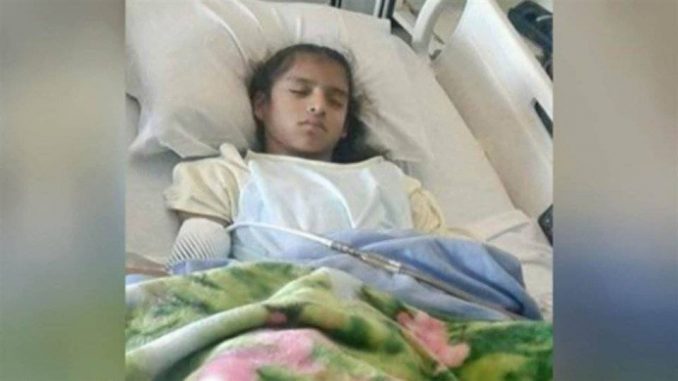 Rosa María Hernández is 10 years old. She has had cerebral palsy from birth, and so, her elementary school teachers say, she has comprehension closer to that of a 4- or 5-year-old.

Rosa María’s mother, an undocumented immigrant, brought her across the border into Laredo, Texas, when she was just three months old, so she could receive medical care.

Doctors discovered Rosa María needed immediate emergency gallbladder surgery on Oct. 24. She was in an ambulance with her cousin, a U.S. citizen, to look after her, speeding toward a children’s hospital in the south Texas city of Corpus Christi, when they were stopped at a Border Patrol checkpoint far from the border.

Following the new punitive Trump/Sessions anti-immigrant protocols, the Border Patrol cops determined Rosa María was an “illegal immigrant.” Only after delay did they finally allow the ambulance to proceed to the hospital, where doctors performed the life-saving surgery.

But Border Patrol agents were placed outside her hospital room door as she lay unconscious so they “could prevent her from escaping.”

The doctors said Rosa María could go home to her mother and family on Oct. 25. They wrote instructions that she should receive postoperative care from her primary care physician in Laredo and be released to “a family member who is familiar with her medical and psychological needs.”

She took two steps out of her hospital room before she was seized by Border Patrol goons and hauled away to a privately contracted juvenile detention facility.

Dan Hetlage, a spokesman for Customs and Border Protection, said in callous defense of this action: “It’s not a traffic ticket. We follow the letter of the law.”

The advocacy group Dream Activist says 10-year-old Rosa María was told “she has two options: sign voluntary departure or spend up to 3 weeks in detention.” In their open letter to Department of Homeland Security Acting Secretary Elaine Duke, the Dream Activist group added: “Families should not have to decide between getting life-saving help or being deported.” (npr.org, Oct. 26)

Rosa María’s jailers won’t even allow her mother, Felipa de la Cruz, to visit her. “All I wanted was for her to get the surgery that she needed. It never crossed my mind that any of what is happening right now could happen. When you’re a mother, all you care about is your child.” (nypost.com, Oct. 26)

Here is the bitter irony under capitalism: The U.S. governing powers say that nothing can be done to prevent an arrogant, rich white man from carrying an arsenal of weapons up to his plush Las Vegas hotel room, converting some into machine guns and opening fire on working people just out to enjoy a concert, killing 58 people and wounding hundreds.

At the same time, they tell us that a critically ill, 10-year-old Latinx child represents a threat to national security and must be wrenched away from her mother and family and deported.

The white supremacist policies pushed by boss Trump and his trillionaire appointees and friends are the real threat to national security — to the safety, health, happiness and security of workers and oppressed people.

By organizing, by hitting the streets in mass protest, by shutting down the whole rotten system, we can turn the tide against the monstrous policies that result in these kinds of atrocities. And we will.