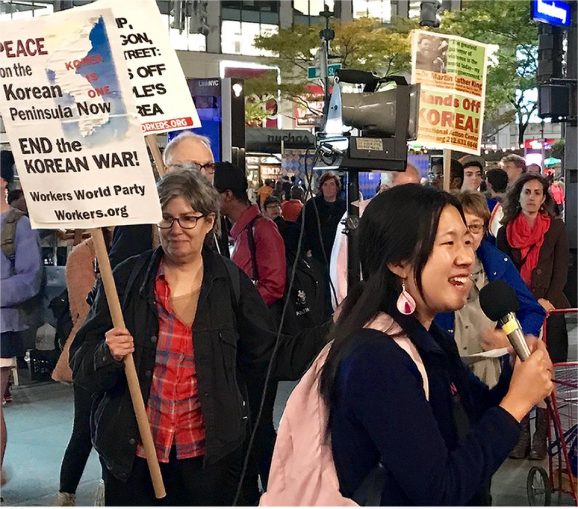 Korean organizations across the U.S., supported by anti-war groups, organized a “No Trump, No War Day” on Nov. 3 and Nov. 4 in New York, Los Angeles and Washington, D.C., in solidarity with “No Trump Day” rallies in Korea and the Asian Pacific and calling on the U.S. to “Sign the Peace Treaty Now!” The following National Statement explains their campaign.

“They will be met with fire, fury and frankly power the likes of which this world has never seen before…”

“They won’t be around much longer…”

“I spoke with President Moon of South Korea last night. Asked him how Rocket Man is doing.”

“Military solutions are now fully in place, locked and loaded…”

Trump’s words have escalated military tensions on the Korean peninsula to a degree this world has not witnessed since the Korean War. When Trump announced his tour of Asian nations from November 3rd to 14th, people of Japan, South Korea, China, Vietnam and the Philippines mobilized en masse to protest Trump and American militarism in the Asian Pacific region. South Koreans are calling their nationwide rallies “No Trump Day,” condemning the United States’ aggressive policies toward North Korea and the ongoing infringements of sovereignty in South Korea.

The “No Trump No War” campaign was announced by over 220 South Korean civic groups organized by the Korean Confederation for Trade Unions in a press conference on October 27th. Tens of thousands are anticipated to participate in the estimated 140 different rallies in South Korea and abroad, especially in Seoul’s Gwanghwamun Plaza, where months of mass demonstrations led to the impeachment of former President Park Geun-Hye earlier this year. Koreans are using “No Trump Day” to demand the end of Trump’s warmongering and military intimidation in recent months; withdrawal of the THAAD system from South Korea; the end of sanctions and hostile policies toward North Korea; and call for peace on the Korean peninsula and East Asia.

In addition to Koreans’ demands, we the people in the United States oppose the Trump administration’s ill-informed escalation of tensions with North Korea, call for a peace treaty between the United States and North Korea to finally end the Korean War after 64 long years, fully support peoples of these countries mobilizing to protest Trump’s visit and preparing mass demonstrations around “No Trump Day,” and stand in solidarity with all people — Koreans, Americans, and others throughout the world — unconditionally committed to preventing a disastrous rekindling of the Korean War.

In the wake of this year’s “Mother Of All Bombs” — so-called for being the largest non-nuclear bomb ever used in combat in human history — dropped in Afghanistan in April; the air-dropping of parts for the THAAD anti-missile system due to Korean residents of Seongju protests blocking roads to installation in late April and early May; and the October 11th U.S. military helicopter crash in Okinawa less than 1,000 feet from a residence and about a mile away from Takae Elementary School; it is clear that the U.S. military presence is a threat to the safety of the peoples of the “host” nations they claim to protect or “liberate.”

These tragedies may have happened during the Trump administration, but it is a continuation of a legacy of U.S. militarization that destabilizes the livelihoods of peoples all over the world, since the enslavements of and genocides committed against Native Peoples and Africans in the Americas in the first British North American colonies preceding the United States. We condemn the Trump administration for its perpetuation of slaughter, militarization and infringements of sovereignty, especially hypocritical for a nation that so espouses the values of “freedom” and “democracy.”

These values are not even observed in the United States. American police, a force developed and refined as a continuation of slave patrols, are handed down equipment and technology including tanks and drones from the U.S. military to terrorize its own peoples. Police surveillance and crackdowns feed into a prison system wherein slavery is completely legal, per the 13th Amendment to the Constitution that did not completely abolish slavery after the Civil War, and by which people of color especially Black, Native, and Latinx Americans are meant to serve as America’s hyper exploitable and undercompensated labor force, often disenfranchised of voting and other civilians’ rights well after imprisonment. If the United States stations troops in foreign countries to “protect our freedom,” why does their increasingly militarized police force terrorize, exploit and slaughter communities within the United States? If we are made as much the “enemy” as foreign peoples, are foreign peoples not just as unjustly persecuted as we? For whom does this promised “freedom” exist, and who or what do foreign military bases actually protect?

Even the South Korean rallies against Trump and war will be heavily restricted, per an announcement by South Korean police that anti-Trump rallies will be banned in central Seoul and other places Trump will visit in Korea on November 7th and 8th. In lands supposedly not under U.S. jurisdiction, the United States stifles people’s freedom of speech and assembly as guaranteed under Article 21 of the Constitution of the Republic of Korea, just as it suppresses American dissent via targeted revoking of voting rights through policing and imprisonment.

Trump’s incendiary remarks and the recent unprecedented provocations by the U.S. military, such as F-35 and B-1B bombers flown to the Military Demarcation Line on September 18th in a highly provocative move to North Korea, must end at once to prevent the crisis on the Korean peninsula from escalating into a war of dire consequences.

To this end, we demand that the Trump administration:

Abolish hostile policies such as sanctions toward North Korea and sign a peace treaty!

Withdraw THAAD, which threatens peace in East Asia and the world, from South Korea!

The U.S. national “No Trump Day” solidarity rallies are endorsed by: