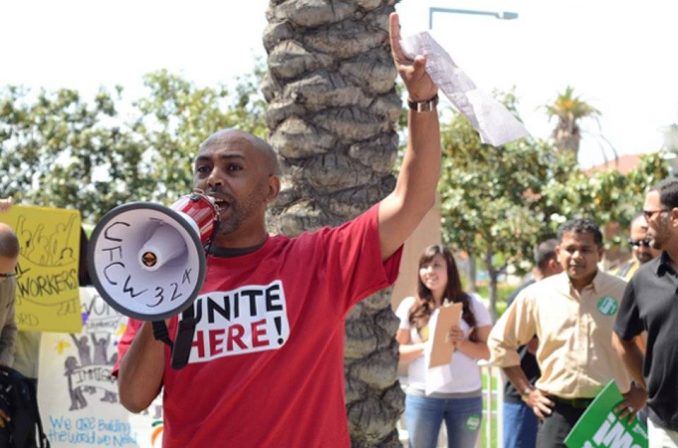 From Oct. 22 to Oct. 25 more than 1,200 delegates to the AFL-CIO’s quadrennial convention met in St. Louis. They came from all over the U.S. and represented a wide range of public and private sector unions.

The labor federation met in a community that has been in revolt against police brutality, first in Ferguson, Mo., and recently in St. Louis itself. Speakers at the convention repeatedly made the link between labor rights and civil rights.

Delegates had the opportunity to put program into practice when the America’s Center, where the convention was held, locked out a delegation from Black Lives Matter that had been invited to speak. The Center management cited “danger to property” as the reason the doors were chained shut. The BLM delegation included state Rep. Bruce Franks.

Former AFL-CIO Executive Vice President Arlene Holt-Baker urged the delegates to walk out and join the BLM members. When they did, the center management relented and let Franks and the BLM activists in. This action took place at a pre-conference program called “All of us or none of us.”

By the close of the convention, the delegates had passed 56 separate resolutions, most of them of a progressive nature. The labor federation took positions to combat climate change, for national health care, for a “Workers Bill of Rights,” for full employment and a $15 minimum wage, for immigrant rights, to “condemn rising fascism” and one declaring that “war is not the answer.”

Not all the stands taken were progressive. For example, resolutions were passed reviving the chauvinistic “Buy America” campaigns. Earlier this year President Rich Trumka made a treacherous decision to work with the Donald Trump administration’s economic advisory council. Trumka and other labor leaders quit the council in response to Trump’s pro-fascist comments after the murder of Heather Heyer in Charlottesville, Va., on Aug. 12.

Trumka, Secretary-Treasurer Liz Shuler and Executive Vice President Tefere Gebre were re-elected with no opposition. In 2009, Shuler became the first woman to hold the office of secretary-treasurer. Gebre, a Sudanese immigrant who begins his second term, is the first immigrant to hold his post.

Need for a fightback program and strategy

In “Value, Price and Profit,” based on an 1865 speech, Karl Marx spoke about labor unions while Europe was in the midst of a mass strike wave for higher wages. Marx hailed this development and tore apart an argument that these struggles were pointless because higher wages would only lead to higher prices.

Nevertheless, Marx saw the limitations of fighting for a bigger share of the value labor alone creates. “Instead of the conservative motto: A fair day’s wage for a fair day’s work!” Marx argued, the unions “ought to inscribe on their banner the revolutionary watchword: ‘Abolition of the wages system!’”

Today, more than 150 years later, the AFL-CIO still has no anti-capitalist orientation. The Workers Bill of Rights, while it seeks to ameliorate the growing pauperization of the working class and its genocidal impact on the most oppressed, still boils down to the old “conservative motto.”

For unions to really advance the interests of their membership and the broader working class, they need a program that challenges the capitalist system of exploitation. They need to recognize that the relationship between labor and capital is inherently antagonistic.

Moreover, there was no serious deliberation on how to resist the ongoing assault on labor or the growth of white supremacy and extreme bigotry. Why not have a conversation about employing general strikes, political strikes, sit-downs and other militant, outside-the-box tactics to push back the whole right-wing agenda? Immigrant workers showed the way on May Day 2006.

The convention took some positive steps in the direction of social justice unionism, in contrast to the narrow, pragmatic business unionism that has hamstrung the U.S. labor movement in the recent past. Showing concrete solidarity with Black Lives Matter was one important such step.

However, much more is needed. Now is the time to revive militant class struggle politics and build a global movement of all working-class and oppressed people.