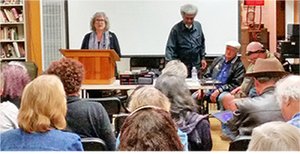 A pair of forums titled “The Fight to Free Mumia Abu-Jamal Continues” were held in San Francisco and Oakland on Oct. 27 and 28. The featured speaker was Rachel Wolkenstein, one of Mumia’s lawyers during his long and successful fight to get off of death row. More recently, victory was achieved in getting Mumia lifesaving hepatitis C medication, as the state was trying to kill him by medical neglect.

Now the fight has turned to the real possibility of a new trial. A 2016 U.S. Supreme Court ruling is the basis for Mumia’s present lawyers to argue that Mumia has been denied due process. That’s because former Philadelphia District Attorney Ronald Castille, now a Pennsylvania Supreme Court justice, has refused to step down from hearing appeals and motions in cases, including Mumia’s, in which he had been involved as a prosecutor. The current DA’s office is stonewalling the court orders requiring the release of related documents.