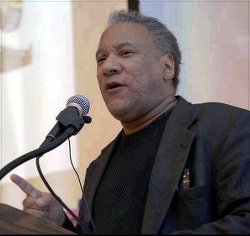 Revolutionary greetings to all, on the centennial of the Russian Revolution.

The 100th anniversary of the Russian Revolution may have different meanings for many of us across the world, based on our age, background and political experiences. That’s understandable.

Why is this such an important anniversary?

The 1917 revolution, referred to sometimes as the October Revolution, and the establishment of the first socialist country, the Soviet Union, was a new beginning, not just for Russia, but for the entire world. The conditions for the revolution grew out of the suffering that the imperialist war subjected the masses of Russia and all of Europe to.

Revolutionaries in Russia hoped that their revolution would spread to Europe. That did not happen.  Still the Russian Revolution opened up a century of struggle for socialism, for revolution and for solidarity with the national liberation struggles throughout Africa, Asia, the Americas and the Middle East. It was the precursor to the Chinese and Cuban revolutions,  other revolutions, and all of the chapters of a century of worldwide class struggle against capitalism and all forms of oppression.

The Russian Revolution convinced millions of people in every part of the world that another world is possible.

It is unlikely that the capitalists will tell the truth about how much they hated and feared the revolution from the very beginning, and how the idea that workers and peasants would dare to rise up against the ruling class and free themselves from their masters horrified them. Nor are they likely to mention that world imperialism, led by U.S. imperialism, dedicated itself to crushing the Soviet Union in one way or another and spared no effort economically, militarily, covertly and overtly in accomplishing this.

Why is the Soviet Union no more? Like Workers World Party, most political tendencies in the movement have their own ideas about that.

It is a discussion that is inexhaustible. It’s a discussion we should have, even if it leads to arguments, as long as we agree not to let the arguing get in the way of the work we must do going forward. Which brings us to our main point.

How should we use this anniversary?

The capitalists pray that the fight for socialist revolution ended with the Soviet Union. It is up to us and millions like us, to affirm that it did not, and that it must not. This is not dreaming; it is cold, calculating realism.

From the perspective of the working-class movement and the struggle of the oppressed, ultimately this is a reality that can’t be ignored much longer. This reality pushes the class struggle and the global struggle against capitalism into a new phase.

The capitalists can no longer pretend that their system can meet the needs of the people. All of the lies and illusions about the wonders of capitalism are crashing, in prelude to the system itself crashing.

For the oppressed, all the system has to offer are deportations, prison, death by cops, Muslim bans, occupation and war, and the way Trump is treating the devastated people of Puerto Rico.  Some sections of the working class used to feel secure before globalization, automation, austerity, union busting, bank foreclosures and pauperization.

Now, all that capitalism has to offer them is white supremacy, “make American great,” misogyny, anti-LGBTQ bigotry and an opioid epidemic.

In more and more ways, capitalism is an existential threat to all life.

How much time do we have before capitalism destroys the environment, making the planet uninhabitable?

When an empire is falling apart, as the U.S. imperialist empire is, it is more, not less tempting to use its remaining advantage, military might. The question is not if, but when and where the next U.S. war will be? Will it be against Iran? Will it be against Venezuela? Will it be somewhere in Africa, where the Pentagon has thousands of troops in at least 53 countries? Or, will it be against Peoples Korea, which would really be against both Koreas and China, making it a third world war? How much longer can we endure such a threat?

A new beginning for revolutionary struggle & higher level of unity

We propose that every group and every individual that considers themselves to be revolutionaries and in the service of the workers and oppressed of the world, including Workers World Party, embrace the 100th anniversary of the October Revolution as a time to rededicate ourselves, not only to fighting capitalism every day, but to bringing it to an end at the earliest possible time, and replacing it with socialism.

Furthermore, we propose that we all commit ourselves to achieving a higher level of revolutionary unity in the struggle. The form that this unity might take is not a question that needs to be answered here. The program, basis and plan of action for such unity are questions that we can answer together if there is the understanding and the will to do so. We will all need to reassess whether or not we are holding on to conceptions, attitudes or any baggage that might be a barrier to a higher level of revolutionary unity. It’s the right time to do that.

An immediate program & a maximum one

As much as we’d like to, we cannot predict capitalism’s imminent demise. Revolution, as a practical task in the U.S., is not yet on the table. The masses will be fighting under capitalism indefinitely for their basic needs and against repression, against all of the mounting attacks and for the right to organize.  Revolutionaries can’t be distant from or above these struggles; they must be in them. Revolutionaries have to work with progressive forces knowing that some of these forces will become revolutionary, while others never will.

We will be constantly fighting the tendency within the larger movement to be pulled in to the electoral appeals of the capitalist parties. This is all the more reason why, as revolutionaries, we need both an immediate perspective and a maximum one. There must be an end game. However long it takes, we must build an independent, mass revolutionary resistance able to take down capitalism.

Trump: a symptom of the crisis

Trump is a symptom of the severity of the capitalist crisis and of the political and economic explosions that are ahead of us.  Trump, with a section of the ruling class behind him, has launched a pre-emptive strike against the prospect of class unity in the coming struggle against capitalism. His goal is to smash the working class into a thousand pieces by attacking its most oppressed sections. We must prevent that from happening at all cost. Fighting the white supremacists and neofascist forces that Trump has empowered is our number one task at this moment

It is critical to understand that Trump didn’t win because of “identity politics,” which is a phrase that really means the oppressed. The struggles of Black, Brown and Indigenous peoples, or Muslims, immigrants, women, the disabled and LGBTQ people, are not responsible for Trump. And neither is Russia. The crises of U.S. imperialism and capitalism, plus racism and the Democratic Party’s abandonment of the entire working class, are to blame.

Almost 100 years ago the communist movement, with the guidance of Vladimir Lenin, changed its main slogan from “Workers of the world unite” to “Workers and oppressed peoples of the world unite.” This change meant that the best revolutionaries in the working-class movement understood that to weaken imperialism, there would have to be solidarity between the workers of the oppressor countries and the people of the oppressed nations.

The struggles of oppressed peoples, including women, LGBTQ people and the disabled, are not secondary struggles. They are working-class struggles and they are central to the working-class movement. If our mission is to prevent Trump and the ruling class from smashing working-class solidarity into 10,000 pieces, then first and foremost we have to stand with and defend the most oppressed.

The capitalist ruling class is not going to allow itself to be voted out. We cannot live in denial of this fact.  The urgency of this truth must move us all to act.

We cannot substitute ourselves for the masses, as tempting as that is sometimes. Nothing can be achieved without the people. We understand that our class must overcome many weaknesses. But we have confidence that it will. It is entirely possible that a time may come when the masses are ready to move and it is the revolutionaries who are not ready, because being ready was not their perspective.

When the great revolutionary leader Lenin returned to Russia from exile in Switzerland in April of 1917, many of his comrades told him that the conditions in Russia made a socialist revolution impossible. Fortunately, he convinced them that they were mistaken.

Let’s make the anniversary of October 1917 the occasion to restart, in a serious and meaningful way, the perspective of socialist revolution. It’s a perspective that has been far too weak for far too long.

This anniversary is a good time to remind the world that there is a future beyond this terrible system. Moreover, that future is not another 100 years away. People who are alive today will help bury capitalism in the graveyard of history.

Youth are rising up

There are promising signs. Capitalism is more and more hated with every passing hour. Amongst the youths of the world, socialism is more popular than capitalism.

And many of these youths are rising up. They are the ranks of Black Lives Matter, of the immigrant rights movement and of Antifa. They are shutting down white supremacist speakers, pulling down racist statues, and fighting fascism and white supremacy. Young militants are also starting to show that they understand the need to engage and learn from wider sections of the working class.

Women and LGBTQ people are visible in the leadership of the rebellion. This bodes well for the future. It is a sign of the transformation of the working class. It’s revolutionary and it must go forward and be defended.

Solidarity is so important

Capitalism has always threatened the health of the masses. Now that the system is in an advanced state of decay, its existence is a daily assault on every aspect of our well being, our identities and our social relationships. We must work deliberately to build a culture of solidarity as part of the struggle and as a necessity for our very survival.

This month also marks the 50th anniversary of Che Guevara’s martyrdom. Che once said that “at the risk of seeming ridiculous, let me say that the true revolutionary is guided by a great feeling of love. It is impossible to think of a genuine revolutionary lacking this quality.”

May Che’s words inspire us all to take a step forward into the future.