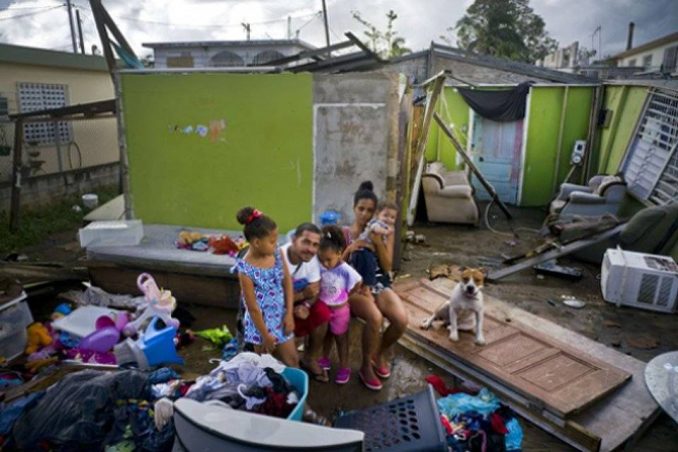 Linda Backiel, a lawyer living in San Juan who is a longtime advocate for Puerto Rican independence, is a guest contributor to WW.

Faced with this dire situation, the Fiscal Control Board has asked the federal judge in charge of the Puerto Rican government’s bankruptcy process to prevent vulture funds and other bondholders from claiming for themselves the emergency funds that the U.S. government has authorized to alleviate the humanitarian disaster.

Puerto Rico is on the verge of a health crisis, with outbreaks of dengue fever, chikungunya, zika, leptospirosis, conjunctivitis, scabies and other diseases that spread due to rain, heat, lack of clean drinking water and water contaminated with debris and live and dead animals.

After almost a month since Maria hit the island, according to Puerto Rican government figures, barely 8 percent of its roads are open and only 17 percent of Electric Energy Authority (AEE) customers have power. This figure includes government agencies, hospitals and businesses. The truth is that very few houses have electricity, and less than 60 percent of the population has access to telecommunications.

The lack of relevant information and transparency is making people desperate. If the priority is to save lives, why, of the 79 open hospitals, do only 45 have power from the AEE with the others dependent on generators? Who determines the priorities? When ordinary people, waiting all day in the sun to receive a generator for their home, heard that AEE had given priority to energizing “The Mall of San Juan,” a luxury mall built on the ruins of a demolished public residential building, they were on the edge of rebellion.

Some 5,000 Puerto Ricans leave the country daily. No one knows how many will return or how long the exodus will last. Soon, the estimated figure of 5 million in the United States and 3.6 million in Puerto Rico will have to be revised.

Economists estimate that it will take 5 to 10 years to see any economic recovery.

The governor keeps announcing grandiose plans and astronomical amounts that he claims have been granted or expended by U.S. personnel and various so-called relief entities. But there is little progress to be seen on the ground.

The U.S. Army Corps of Engineers, Coast Guard and the federal departments of the Treasury, Transportation, Health and Human Services and the Food and Drug Administration and Internal Revenue Service make all decisions about containers arriving at ports, where victims are to be relocated and other essential matters. But deliveries of containers with aid supplies and goods to supply markets and shops are consistently delayed.

There is a severe scarcity of generators, batteries, candles, water, fresh fruits and vegetables, hot food and water to cook rice. The 21 municipalities where coffee is produced will not see any production for three years — the time it will take to plant thousands of trees and harvest the first crop.

Puerto Rico’s Finance Department (Hacienda) was left without funds and without its computer system. The judicial branch, the least powerful branch of government, began to function partially this week. The cases scheduled for October will not be heard until December.

According to an Oct. 16 article in El Nuevo Día, a quarter-million homes were damaged and some 10 percent of the population was left homeless. Some families still live in the only room in their house that was not destroyed.

The Federal Emergency Management Agency offers financial help to rebuild homes, but only to those who have title of ownership or receive the government’s permission. This disqualifies many who, driven by necessity and lack of affordable housing, occupied properties abandoned by the government or the prior owner.

There are 2,500 public housing units available, but by the time Maria arrived the waiting list was already 25,000 people.

Over 18,000 vacant homes that were repossessed by banks should be available. But only 6,000 are certifiably eligible, while 12,000 do not meet established requirements. There are also 2,000 unsold new homes that are not being used to house the homeless.

There are no cables left to repair the electricity, telephone, cable and internet lines that Maria collapsed. FEMA blames the mayors who send out cleaning brigades to clear the roads and collect debris. FEMA wants the workers to leave the cables aside and avoid breaking them so they can be fastened to others that are also broken.

But workers do not open roads or collect debris on foot; they ride machines that do not allow them to distinguish between thin cables and branches of fallen trees. It has been confirmed what AEE workers have denounced for years — that AEE’s warehouses are empty. There are no cables, posts or other material needed to replace the system.

It is the lack of maintenance that led to the collapse of the electrical generating and transmission systems. FEMA awarded $240 million contracts to a U.S. company for repairs — one of many such contracts — but the recipients do little other than pay their employees and distribute profits in the U.S.

Still, the communities are standing strong, serving hot breakfasts and offering medical, dental and educational services to their children, thanks to volunteer community labor.

The unions have opened “regional centers of solidarity” for their members and families where they offer everything from medical services to help with requests for material assistance. Restaurant chefs are providing meals to refugees and others. Almost all musical institutions and many artists are contributing their “grains of sand” — offering concerts and serenades, including to people waiting in long lines at banks.

The past stage of a supposedly happy and satisfied Puerto Rico waiting to be exploited by tourists and speculators has collapsed. Behind the scenes there is a Puerto Rico that is organizing itself to revive, building on its native roots to develop new institutions that serve the Puerto Rican people.