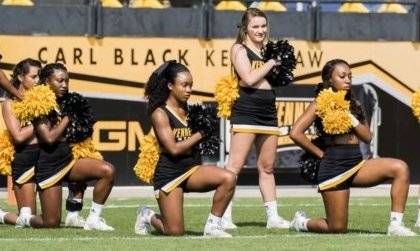 Atlanta, Oct. 22 — Five young Black women, students at Kennesaw State University, have ignited a struggle here against white supremacy and racism that has spread beyond their campus.

They took a knee as the national anthem was played on Sept. 30 prior to the KSU Owls football game.They have said they were inspired by Colin Kaepernick and the many other professional and amateur athletes, including high school and middle school students, who have shown visible opposition to police violence and shootings of unarmed Black and Brown men and women.

Cobb County Sheriff Neil Warren, who has earned a reputation as a steadfast advocate of racist, anti-immigrant law enforcement, declared his outrage at the “unpatriotic” actions of these “ill-informed students.” (Marietta Daily Journal, Oct. 16)

He and State Rep. Earl Ehrhart, an influential, conservative state legislator who chairs the committee allocating funds for public universities, took their complaints directly to KSU’s recently appointed president, Sam Olens, former Republican state attorney general and two-term chair of the Cobb County Commission. According to Sheriff Warren, he was assured by Olens that it “would not happen again.” (Inside Higher Education, Oct. 12)

Olens, who has no background in education, was chosen by the State Board of Regents, a body largely composed of appointed white, male, corporate leaders, who did not put up even the facade of a national search. Olens’ appointment was met with protest and anger from students and faculty at the rapidly growing university of 35,000 students, who worried about the intentions of a career politician.

Immediately after Sept. 30, the cheerleaders were ordered to remain off the field until after the anthem was played. KSU claimed this was a way for the cheerleading squad and the band to make a better entrance at games and was an idea proposed and long planned by the athletics department.

Needless to say, the Kennesaw 5 didn’t buy that explanation. Email exchanges among university officials and Olens, Warren and Ehrhardt, released by open records requests, revealed that Warren and Ehrhardt congratulated each other on pressuring the university president to remove the cheerleaders during the anthem, saying it was their idea.

The young women have held steadfast and have been taking a knee in the stadium tunnel. Students, faculty and community supporters have held several protests on campus, including Oct. 19, at Olens’ swearing-in ceremony as KSU president.

Today, at a Stop Police Brutality protest in front of CNN headquarters in downtown Atlanta, the Kennesaw 5 were honored by families of victims of police shootings, including Felicia Thomas, the mother of Nick Thomas who was killed at his job by Cobb County police agencies. They were applauded for representing the growing resistance to all the forms of racism and repression experienced daily by oppressed people in the U.S., and were embraced with tears and smiles by mothers whose children have been killed by police agents.