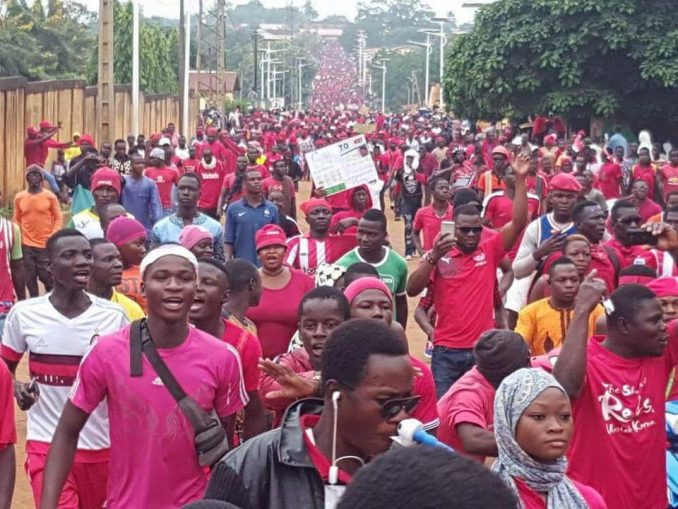 Editor’s note: U.S. military presence and intervention continue to ramp up on the African continent, with reverberating consequences. Bourgeois news sources trumpet the devastating bombing deaths of more than 300 people in Somalia on Oct. 14, but neglect to reveal the instigator’s hometown was attacked by U.S. Special Forces two months ago, killing 10 civilians. (Guardian, Oct. 17) U.S. politicians make patriotic hay from the death of four Special Forces soldiers in Niger on Oct. 4, but never mention that the U.S. is building a massive “hunter/killer” drone base, the “largest U.S. Air Force-led construction project of all time,” attempting to control much of West Africa. (CNN, July 21)

Despite their propaganda, U.S. or European powers never send troops or economic emissaries to countries in order to “keep the peace” or to “assist struggling developing countries,” but always to set up a platform for exploitation and domination, or for destabilization of a country trying to wrest its political independence from their grasp.

In Togo, opposition demonstrations against the government, restricted by Togolese officials, were carried out nevertheless beginning on Oct. 18. These actions, which have spread broadly across the West African state in recent months, have been a source of concern to the current government.

Fourteen opposition parties and coalitions are united in an effort to force the removal of the regime of Faure Gnassingbe, the president whose father took complete control of the country as a result of a military coup engineered by France during 1967. Togo has a population of 7.8 million people, with a tumultuous history of colonization by Germany, France and Britain.

Anti-government forces had begun mobilizing for marches when the minister of territorial administration, Payadowa Boukpessi, announced at a press conference in the capital of Lome that street demonstrations would not be allowed [on the scheduled days]. The spokesperson for the government emphasized that people would be allowed to gather at fixed spots instead of taking to the streets in marches.

Providing a rationale for the restrictions, Boukpessi stressed on behalf of the administration that “there have been calls for civil disobedience, calls for economic sabotage, even calls for murder issued by protesters targeting the authorities and members of their families as well as security services.” (AFP, Oct. 10) Since the beginning of anti-government demonstrations in August, the country’s internet services have been periodically shut down by the administration in Lome.

Despite the government claims of violent tendencies on the part of the opposition groups, it is the Togolese authorities who are responsible for several deaths, the wounding and injuring of scores of people along with the arrests, and the prosecution and imprisonment of leading political activists. Hundreds of thousands of people have taken to the streets in the last two months calling attention to the machinations of the government aimed at extending its dominance of political power. Most people in Togo work within the agricultural sector in cocoa and coffee production.

The opposition forces moved forward on the actions slated for Oct. 18 with the intended purpose of bringing large crowds into the streets. The big march was directed towards the offices of [the West African regional group] ECOWAS in Lome.

Brigitte Kafui Adjamagbo-Johnson, a political leader of one of the anti-regime coalitions, said of the announced restrictions by the government: “The fight continues.” (Sunday Vision, Oct. 22)

Adjamagbo-Johnson, a longtime political activist, was, in 2010, the first woman to run for president of Togo. She has worked on various projects designed to enhance the status of women inside the country.

During the largest anti-government demonstrations on Oct. 4-5, Adjamagbo-Johnson emphasized the willingness to negotiate on the part of the opposition, saying: “We can never say no to dialogue. The president himself has not called for any dialogue despite seeing what is going on in this country. We all know that he has heard our messages that we are sending.” (Africa News, Oct. 5)

Eric Dupuy, the spokesperson for the National Alliance for Change (ANC), reiterated that proper legal requirements for notification of the Oct. 18-19 demonstrations were met, and consequently there was no basis for the announcement by Boukpessi. “If the government decides to break the law, the people will not respect it,” the ANC spokesperson said.

In response to the demonstrations, the Togo Parliament has quickly passed a draft bill calling for term limits. The legislation would ostensibly mandate a maximum of two terms of office for the presidency, not retroactively, instead moving forward. Opposition parties have criticized the parliamentary actions, noting that it would still allow Gnassingbe to run for an additional two terms of office, extending his tenure potentially to 2025.

Members and supporters of the ruling Union of the Republic (UNIR) party held their own series of demonstrations in support of President Gnassingbe on Sept. 20-21. UNIR has rejected the claims by the Pan-African National Party (PNP), the National Alliance for Change (ANC) and the Group of Six, who are all demanding sweeping political reforms.

Opposition members of Parliament refused to support the measures, saying they did not go far enough in guaranteeing genuine democratic practice. They are calling for the restoration of the 1992 constitution, which grew out of a nationwide process of negotiations, debates and discussions.

In the aftermath of the death of former President Eyadema Gnassingbe in 2005, his son Faure was installed, in contravention to the wishes of the opposition forces. He is currently serving his third consecutive term in the presidency.

Regional and international implications of the Togo crisis

The government of Ghana has realized the potential for the conflict in neighboring Togo to spill over into its territory. Togolese refugees have fled across the border fearing an intensification of the political violence. Ghana has strengthened its security on the border with Togo since the eruption of demonstrations nearly two months ago.

The unrest in Togo is taking place alongside other developments in West Africa, including the secessionist movements in South Cameroon and Southeast Nigeria, and the killing of several U.S. Special Forces troops in Niger.

In a joint statement on the situation in Togo, the Economic Community of West African States (ECOWAS), the African Union (AU), and the United Nations Office for West Africa and the Sahel (UNOWAS) acknowledged that the political tensions in the country require constant monitoring by regional and international groupings.

An Oct. 4 press release states: “The three organizations take note in particular of the passage of the draft constitutional bill to amend relevant articles of the Togolese constitution. … [They] call on the Government to set a date for the organization of the referendum on the draft bill. They encourage the opposition to take this opportunity to further advance the constitutional reforms.”

On Oct. 10, the opposition refused offers to meet with a delegation from the International Organization of La Francophonie (OIF), which arrived in the country in an attempt to mediate the conflict between anti-Gnassingbe parties and the government. OIF is a relic of the Parisian imperialist system from the late 19th century, consisting of representatives of 57 member-states who have French as their national language. The organization was relaunched in 1970 to promote joint projects between France and its current as well as former colonies.

The situation in Togo requires drastic moves on the part of the government. Until a more representative system is established, unrest will continue.