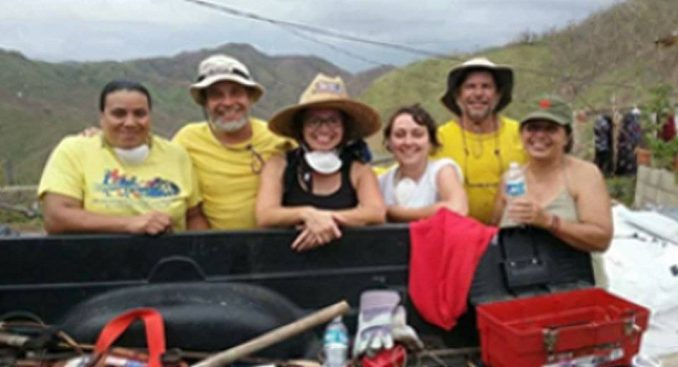 What follows is the text of an email from the International Action Center sent to activists around the United States.

The International Action Center is launching a people-to-people aid campaign for the ultra-devastated nation of Puerto Rico.

The IAC is collecting monetary donations to send to politically established grassroots organizations — specifically the Puerto Rico Teachers’ Federation (FMPR), which is working with other unions and groups organizing working brigades throughout the island to help poor communities, teachers and students who lost everything.

Why is the IAC launching this campaign?  The entire world has seen the utter destruction of the beautiful island of Puerto Rico after Hurricane Maria hit the Caribbean on Sept. 20.  Weeks after the hurricane hit, millions remain without food, water or shelter.  Almost the entire island has no electricity. People are dying, hungry and desperate despite the fact that it is well-known that the U.S. could alleviate the situation if it really wanted to.

It will take years to repair Puerto Rico. But if the solidarity movement does not continue its work in the U.S. to demand genuine aid, the island could be rebuilt entirely for the needs of the banks and the corporations. The gentrification we see in our neighborhoods will take over the entire island.

Furthermore, the struggle against colonialism and for the independence of Puerto Rico could be completely derailed as a result of this catastrophe. We are confident, however, that the Puerto Rican people will not allow this to happen.

The IAC wants to do its part to help. We are carrying out people-to-people solidarity by sending money to organizations that have long been in the struggle to defend the people from U.S. imperialism.

Long after the news of Puerto Rico is off the front pages, solidarity actions with Puerto Rico and all the Caribbean will be urgent. The U.S. solidarity movement is now discussing people-to-people work brigades as well as continued protests to demand real aid, not military occupation for Puerto Rico. Furthermore, Trump’s arrogant actions toward Puerto Rico cannot be used by the Democrats to overlook the real issues. It was under the Democratic administration of Barack Obama that the Promesa Act was passed, forcing Puerto Rico to pay the illegitimate debt of $74 billion!

Donate to the IAC at iacenter.org. One hundred percent of the money collected will go to the FMPR with a message of solidarity against U.S. imperialism.

We are calling for: