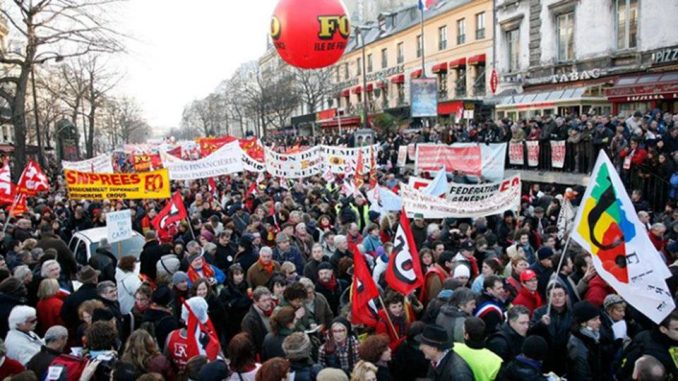 “Badly paid, scorned, our jobs in jeopardy, layoffs, cuts in sick pay, tax hikes, increased required deductions for teachers’ pensions, salary freezes” are some of the reasons the Federation of United Unions (FSU), one of the major unions representing teachers in France, gave for a one-day walkout Oct. 10.

There are 5.4 million public service workers in France, in areas such as the railroads and subways, air traffic controllers, teachers and health care workers from doctors to porters. Even in privatized sectors like the post office and the telephone system, there are still pockets of public workers.

These public workers all have similar grievances to the teachers and at least 400,000 of them walked out Oct. 10 to challenge the government of President Emmanuel Macron and its big-business allies. The latter explicitly have told public service workers that they have to do more with less. They plan to cut 120,000 jobs in the next 5 years.

For the first time in more than a decade, all the French union confederations participated. It’s true that Workers Force (FO) was allied with the CGT in 2016 to militate against the “Socialist” government’s attack on French labor. Lately, however, only the CGT and some smaller confederations, like Solidaires, have resisted the attacks from Macron’s Forward the Republic Party (LREM).

The leadership of the French Democratic Confederation of Labor (CFDT), the labor confederation vying with the CGT to become the largest, most influential in France, has been under increasing pressure from its base to actively oppose the new labor law imposed by the LREM government. The CFDT has also seen its allies in the French “Socialist” Party, a party which has often run France’s bourgeois imperialism, crushed in the last election.

All of the major progressive parties on the French left had contingents in the Paris march — the French Communist Party (PCF), the New Anticapitalist Party (NPA) and Unbowed France (FI) were the most prominent, but even the Socialist Party had a presence.

Unbowed France has been particularly active. François Raffin, one of its deputies, a prominent leader of Nuits Debout and a well-known movie director, took the floor in Parliament on Oct. 11 to accuse Macron, his prime minister Edouard Philippe and some other top government ministers of personally attempting to cover up a scandal in Sanofi. Sanofi, a giant French pharmaceutical company, has been charged with selling a dangerous drug called Dékapine. (FranceSoir, Oct. 12)

Macron has also been forced to defend himself over his characterization of workers in France as “slackers,” more interested in “going to brothels” than going to work.

The CGT has called for another strike and demonstration Oct. 19, and there will be an all-union meeting to plan further actions in early November.