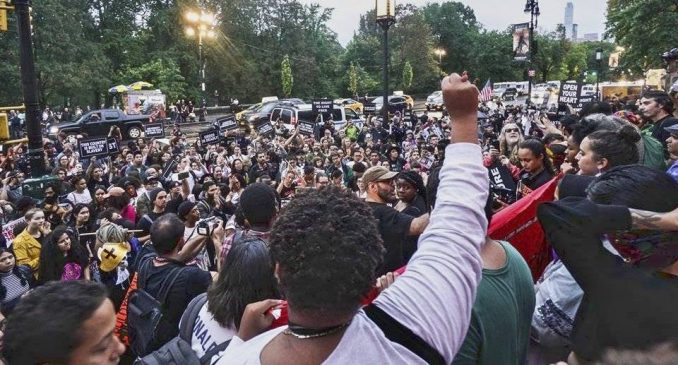 By Johnnie Stevens and Sara Catalinotto

Indigenous Peoples Day in New York City this year featured a two-day cultural festival, a museum tour and a rally of 1,000 people to demand removal of colonial statues, along with other actions and declarations.

Redhawk Native American Arts Council hosted the Indigenous Peoples Celebration on Randall’s Island in the Harlem River on Oct. 8 and 9, with the theme “Rethinking Columbus Day and Honoring Water Protectors.”

Decolonize This Place held its second annual anti-Columbus Day tour at the American Museum of Natural History on Central Park West, where another offensive statue disgraces the front steps: U.S. President Teddy Roosevelt in uniform on a horse, with a half-naked African man and an Indigenous man below and behind on either side of the horse. Roosevelt was instrumental in the military colonization of Puerto Rico, currently continued in U.S. efforts at economic recolonization combined with the aftermath of devastating hurricane damage on the island.

In the afternoon museum action, hundreds went inside, lined up for tickets and then conducted a tour using the “people’s mike” technique. (Video at tinyurl.com/y7yk6edz.) While singing, drumming and explaining how the artifacts were acquired, participants also passed out a brochure to museumgoers titled “Debunking Christopher Columbus: #NotMyHero.” (RemoveColumbus.com)

By the time the tour left the museum, the crowd had grown to a thousand strong. The rally outside reflected the growing struggle against colonialism and racism, which also includes the movement to take down Confederate symbols. Indigenous activists were joined by activists in Black Lives Matter of Greater NY, the Puerto Rican diaspora and from Palestine and many other cultures. Solidarity groups, veterans and community groups such as Brooklyn’s Movement to Protect the People and citywide Parents to Improve School Transportation were there, too.

Various speakers noted that there must be some better way to honor working-class Italian immigrants and their descendants than to associate them with the horrific aftermath of Columbus’ expedition that perpetrated genocide on peoples of the Americas and of Africa.

In the buildup to the anti-Columbus Day action, the corporate media and police spread false rumors that opponents of local Columbus statues 1) are anti-Italian, 2) might knock down a 125-foot statue in the middle of a major traffic circle or 3) would disrupt the Fifth Avenue Columbus Day parade. But the movement itself expressed solidarity with Italian-American pride as well as Indigenous pride.

A call-in campaign by Remove Columbus is focusing on two leaders of the city’s new Commission on City Art, Monuments and Markers, seeking removal of five local Columbus statues. The commission — which also includes civil rights activist Harry Belafonte and president of historically Black Spelman College Mary Schmidt Campbell — is tasked with advising Mayor De Blasio by December 2017 “on issues surrounding public art and historic monuments and markers on city-owned property,” according to a brochure about the commission.

A concerted effort to change the city’s Columbus Day to Indigenous Peoples Day was announced at a Oct. 9 press conference by New York state Assemblyperson Charles Barron, who has introduced a bill to that effect, supported by New York City Councilmember Inez Barron. Both also suggested renaming the Columbus Day Parade as the Italian American Day Parade. (dnainfo.com)

In New Jersey, Newark Mayor Ras Baraka issued an executive order recognizing Indigenous Peoples Day on the second Monday of October in the city, calling that “an opportunity to celebrate the thriving cultures and values of the Indigenous Peoples of our region.” (brickcitylive.com) Each of these three elected officials is a product of the 20th century Black Liberation Movement in this country.

Although the city of New York has yet to rename the October holiday, Teamsters Local 808 Secretary-Treasurer Chris Silvera told WW that the day has been listed as Indigenous Peoples Day in his local’s contract since 2015.