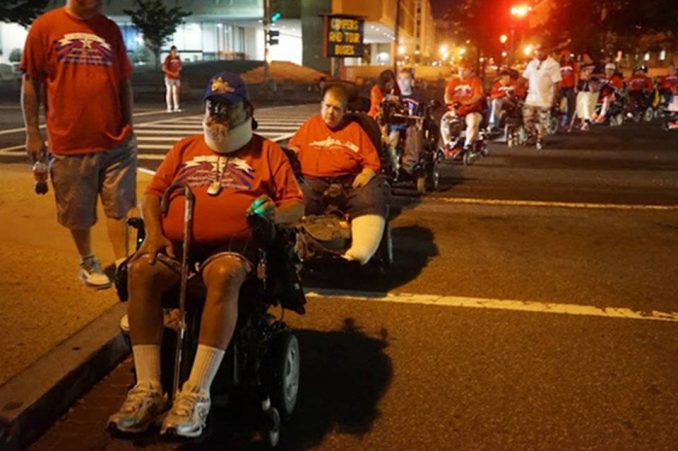 About 200 disability rights activists were arrested in September disruptions of Senate hearings on a reactionary health care bill.

Surrounded by a cabal of smirking small business owners, President Donald Trump scrawled his signature onto another executive order on Oct. 12. This one outlined his administration’s policy to weaken key sections of the Affordable Care Act passed under the Obama administration.

This latest executive order threatens to drastically loosen the ACA’s requirements for the kinds of policies insurance companies are allowed to sell to both employers and individuals. It makes a push for expanding the use of employer-managed health savings accounts for paying medical costs.

For now, this order is only a threat. Experts say it would take the Trump administration months of a full-throttle effort to develop this policy in detail. In addition, it would likely entail a third major health care battle in Congress. Two previous attempts to repeal and replace the ACA were already defeated in the Senate this year, though only narrowly and only after tremendous fightback from grass-roots movements, especially by people with disabilities.

Much more significant than the executive order, however, was Trump’s announcement on Oct. 12 that he would end federal subsidies that help millions of people afford their insurance premiums. This announcement comes just two weeks before open enrollment begins for people who need those subsidies to purchase insurance on the 2018 Health Insurance Marketplace.

The executive order and the announced subsidy cuts signal a looming danger for all workers and oppressed people, with the sickest and most at-risk communities very likely to experience the brunt of this predatory attack.

Without these subsidies, monthly premiums for many people could cost as much as their rent. Initially, it is likely that insurance companies will absorb some of the increase to keep from losing captive markets, and spread much more significant increases out over time. But insurers have already planned to raise premiums in 2018 and 2019. Without subsidies, some insurers may withdraw from the marketplace altogether.

These subsidies, which total about $7 billion annually, are a federal guarantee to the insurance industry that Obamacare won’t infringe on their profits. The ACA requires Congress to appropriate the funds necessary to pay these subsidies. Trump argues that because Congress failed to renew the appropriation this year, his administration had no choice but to end the subsidies. Eighteen states and Washington, D.C., are suing his administration in an attempt to block cuts to the subsidies.

The debate over whether to find a way to pay these subsidies is likely to break out in Congress. Will Congress appropriate the funds necessary to keep insurance premiums from skyrocketing? This is just one immediate question. Another important issue is whether the far right will attach more of their reactionary anti-woman, anti-immigrant, anti-LGBTQ agenda to any bills that reverse Trump’s order and allocate funds for subsidies.

Why defend the ACA?

About 120 million people in the U.S. get health care coverage through social safety net programs — Medicare and Medicaid. Nine million of them are children previously covered under the Children’s Health Insurance Plan, which Congress allowed to expire Oct. 1.

Another 115 million people access health care using insurance plans they purchase through their workplaces or unions. Oftentimes, their employers pay some costs of the monthly premiums. Tens of millions more have historically been uninsured or significantly underinsured.

The ACA, which went into effect in 2014, was designed primarily to provide affordable health insurance coverage for the tens of millions of uninsured and underinsured people who could not afford to enroll in a workplace or individual plan and who did not qualify for social safety net programs. It did this by expanding Medicaid through the states to people earning lower incomes above the poverty line, and by creating subsidies for people to purchase regulated individual or family plans. However, 19 states refuse to expand Medicaid, and 11 million undocumented immigrants are ineligible for ACA coverage.

In order to subsidize these plans, the ACA required Congress to appropriate funds to pay the huge subsidies to insurance companies as an incentive for insurers to support the law, rather than lobby against it.

The Congressional Budget Office estimates that during enrollment for the 2017 plan year, more than 20 million people enrolled in health plans through the ACA marketplaces and through expanded Medicaid in states where it was provided. The CBO reports that nearly 10 million of those who purchased plans on the marketplace qualified for subsidized pricing. The estimated premium subsidies bill that the federal government is paying in 2017 to insurance companies for those plans is $7 billion. While the cost averages out to about $700 per person, some receive a small subsidy, though the poorest receive subsidies higher than $700.

Shifting that burden back onto low-income people — who often are barely able to afford their monthly rent and electricity — would threaten the health and lives of millions.

Defending the ACA, including these subsidies, is a life-and-death issue for many. It is the difference between a person being able to get a chest X-ray to diagnose pneumonia and get antibiotics, or someone staying home to battle out a terrible cold and passing it on to others. It is the difference between getting essential substance abuse services when a person is ready for help in quitting opioids, versus continuing to use and possibly overdosing.

The ACA is a big step in providing health care to millions, although it is a capitalist measure, largely tied to insurance companies. Universal coverage is needed for everyone, such as a single-payer system. Health care activists are calling for “Improved Medicare for all.”

What is wrong with HSAs?

Throughout his election campaign, Trump touted the health savings account as a centerpiece in his goal of repealing and replacing Obamacare. Once again, he is eyeing the HSA as a potential instrument to appeal to people who will likely want an escape route from the soaring costs of ACA-mandated insurance, as premium fees begin to skyrocket.

Currently, under the ACA, pre-tax HSA contributions are capped at around $3,400 per year. This limits the function of HSAs to allow people a tax-free avenue to set aside a portion of their wages to cover costs of the average plan deductible.

To big capitalists like Trump, removing the HSA limit is appealing for two reasons. First, this would create yet another tax shelter for high-income earners. Second, for low-wage and middle-income workers, the HSA is yet another financial instrument, like the 401(k) retirement savings plan, designed to guarantee that a growing percentage of wages flow into the balance sheets of banks and financial institutions. There, they are turned into more profits before being paid out for people’s necessities.

Because health care and related industries, such as pharmaceuticals and medical technology, are big business in the U.S., produced to generate profit and economic growth first, and meet human needs second, the larger crises faced by capitalism send shockwaves through the health care system. When patients cannot pay their bills because the economy is in recession and mass layoffs are on the rise, hospitals falter, merge, and some may close down. In hospitals that survive, emergency rooms are overcrowded, staff are stressed to the breaking point and collective bargaining units representing health workers are pressured to accept austerity contracts.

So plan premiums and the subsidies that help pay them aren’t the only things to worry about with the current attacks on the ACA. Out-of-pocket costs for even the best plans available could keep rising as a way for insurance companies to reap more profits. These costs include deductibles, copays and other health-related expenses, such as mobility equipment and breathing aids, not fully covered under many plans.

In addition, many other ACA provisions are vulnerable, including appropriations that bolster Medicaid-based workforce development programs that train providers and nurses to address health problems that most effect oppressed urban and rural populations, and measures aimed at addressing health inequalities faced by African-American and Latinx communities, as well as women and LGBTQ people.

Make no mistake: The Trump administration’s latest attack is an attempt to undermine and destroy the ACA. If workers and communities continue to fight back, that fight can eventually raise the broader demand that health care be set up to meet people’s needs, not make profits.