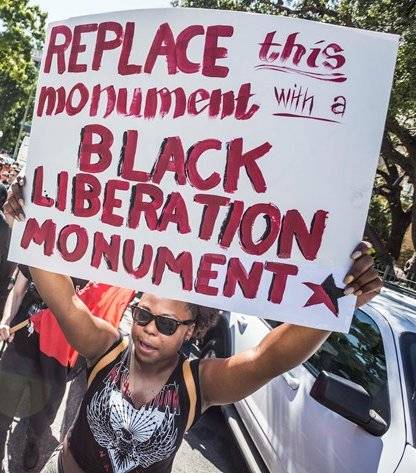 San Antonio, Texas, residents have finally won after nearly three years petitioning and beseeching the local school board of San Antonio North East Independent School District (NEISD) to change the name of Robert E. Lee High School. They are asking for a name that reflects values and history that don’t celebrate two centuries of racism and racial prejudice.

The arduous undertaking began with a single brave and determined student, Kayla Wilson, now an alumna of the school.

In 2015, Wilson, then a senior, began a petition requesting a name change for the school. She was prompted by comments made by former San Antonio Mayor Julian Castro after Kentucky’s removal of a Confederate memorial to Jefferson Davis from the state Capitol.

Early on, Wilson’s requests for a name change to the school were shot down by residents, mostly white and Latinx, saying that this move was a lone student’s vendetta and that there is no reason to change the city’s history because of a single student being offended by the name. They ignored, however, the nearly 11,000 signatures on two petitions over two years and the fact that the high school has had a lower Black student population than most other schools in the district.

Other opponents have gone so far as to claim that the request for a name change is a purposefully divisive endeavor to increase racial tensions in the school and district. They say the school has always been a “safe place” for people of all ethnic backgrounds. They claim that there haven’t been racial tensions in the school historically, though that conveniently overlooks that the majority of the students at Robert E. Lee High School are white.

For Black students, the name is a constant reminder of the more than 200 years of slavery and Jim Crow treatment of their ancestors. There is speculation that this is the reason for the low rate of African-American students going to the school, in comparison with other schools in the district.

Other residents showed support. Some said that as long as 30 years ago they wondered why the district was glorifying a Confederate general instead of a person or theme that celebrated more progressive and inclusive values. Some called out NEISD board member Edd White, who is African American, on his silence about the multiple name-change requests made over a three-year period.

Progress in the Southern states has been slow but nonetheless inexorable. This Sept. 1 saw the removal of another Confederate statue in San Antonio: Travis Park’s memorial to the “Confederate dead.” Often cited as the first memorial statue in San Antonio, it was erected in 1900 and paid for by the Daughters of the Confederacy. In a recent statement, Patricia M. Bryson, president general of the United Daughters of the Confederacy, said:

“We are saddened that some people find anything connected with the Confederacy to be offensive. Our Confederate ancestors were and are Americans. We as an Organization do not sit in judgment of them nor do we impose the standards of the 21st century on these Americans of the 19th century.”

Do residents of 21st century Germany feel that way about their heritage of Nazis’ fascist and racially motivated atrocities? Should Nazi flags and statues of Adolf Hitler or Heinrich Himmler retain prominent places of public life because it’s their heritage and history?

The NEISD Board of Trustees finally agreed on Aug. 29 to change the name in the wake of the racially motivated violence that broke out in Charlottesville, Va. That incident prompted a nationwide awareness about the presence of Confederate monuments in many states.

Submissions for the school’s new name were accepted through Sept. 25. The school board has requested that “the name should reflect an idea, not a person.” It also stated that it would prefer a name that is “wholesome” and “welcoming and identifiable to the general public.”

We applaud Kayla Wilson and her fellow residents on their resolve not to allow these monuments to racial prejudice to retain their prominence, and we gladly stand in solidarity with their struggle against more than 200 years of racial injustice.