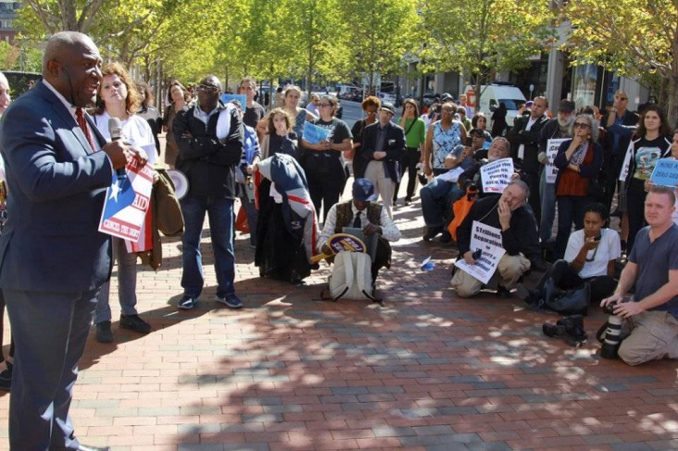 A lunchtime crowd gathered outside the JFK Federal Building in Boston’s Government Center Oct. 4 to express strong solidarity with the people of Puerto Rico and outrage over the inadequate — and downright deadly — federal relief efforts by the Federal Emergency Management Agency following the two devastating hurricanes that hit the island in September.

Rally-goers also raised high the demand to permanently end the Jones Act and cancel all Puerto Rican debt. The Jones Act of 1920 keeps activity in Puerto Rico’s ports under tight U.S. economic control, limiting maritime traffic and especially strangling the inflow of international relief in times of disaster. The debt crisis, as many who rallied nationwide in coordinated actions could attest to, has been growing more and more critical over the last decade.

The rally was organized by Vamos4PR, a national coalition of labor and community groups dedicated to stateside efforts that address the needs and struggles of those living in Puerto Rico.

Labor activist Otoniel Figueroa-Duran held his Puerto Rican national baseball team hat proudly in the air as he spoke to the crowd: “The vultures have been circling Puerto Rico for decades, and in 2006 the country went into a downward spiral of economic depression. They destroyed the Puerto Rican economy. They forced the island government to sell its schools and close hospitals — people have been dying before Hurricane Maria because of the big banks and the vulture funds.”

Individuals and community groups from the Puerto Rican diaspora in New England, which goes beyond Boston, turned out as well. Many expressed spirited anger toward the federal government for its neglect of their families and loved ones back home and vowed to continue struggling to defend Puerto Rican safety and sovereignty.