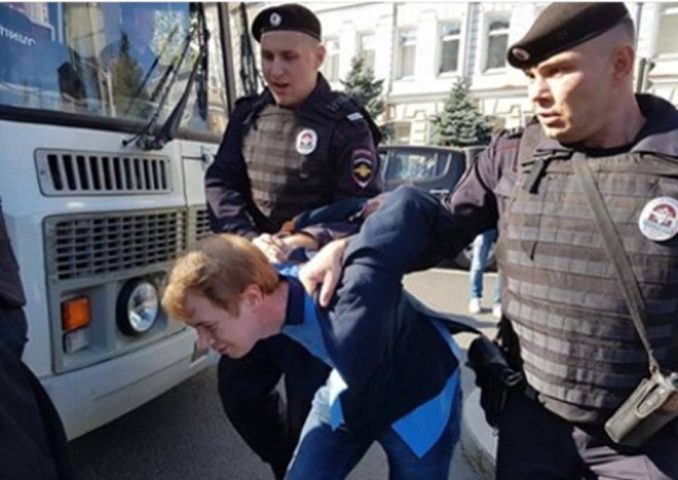 Communist and other leftist youth in Moscow had planned to hold their annual “Anticapitalism-2017” march on Sept. 23, highlighting the crisis conditions for young workers since the restoration of capitalism in Russia a quarter-century ago. This year’s event held special significance for many, as it fell during the 100-year anniversary of Russia’s 1917 socialist revolution.

However, Moscow city officials denied the usual authorization for the march. In violation of the law, the mayor’s office first delayed its response to the organizers, then did not offer an alternative march route, and finally ignored the organizers’ offer of an alternative.

Believing they were well within their rights, activists came out Sept. 23, declaring they would hold a “people’s festival.” But police were waiting. They stopped and arrested many before they could reach the gathering site, including Left Front coordinator and former political prisoner Sergey Udaltsov and United Communist Party First Secretary Vladimir Lakeev.

Those activists who were able to gather unfurled a banner and began to march, determined not to be intimidated. But police roughly broke up the demonstration, throwing people to the ground and arresting about 40 in all.

In response, Workers World Party from the U.S. issued a statement of solidarity with the Russian activists. It read in part: “These dangerous moves against the Russian Left come at a time when U.S. imperialism, under the Donald Trump regime, is threatening war and carrying out provocative acts against countries around the world, including Russia and many of its allies. It can only be called foolhardy on the part of the authorities of the Russian Federation to engage in physical and political attacks on the best and most determined fighters against U.S. imperialism, friends of Donbass, and committed anti-fascists.”

Workers World spoke with Sergey Chekrygin, secretary of the Central Committee of the Union of Communist Youth, who was among those arrested on Sept. 23, about the action and what was behind the police crackdown in Moscow.

WW: Sergey, can you tell us about the idea behind “Anticapitalism-2017”? How many years has it been going on? Who is involved?

Chekrygin: This youth action against capitalism by the left forces of Russia has been held annually since 2001. It’s based on the “Marches to Moscow” [mass marches of workers organized by the Labor Russia movement in the 1990s]. Several left parties and movements take part.

In the past, it was accompanied by mass marches and rallies, and sometimes by rock concerts. In 2002, during “Anticapitalism-2002,” there were clashes between the left and the police. Militia cordons were broken, and about 100 demonstrators were detained. A lot of people went to jail.

Moscow City Hall illegally banned our march this year, but we found the strength to go out to this action, albeit in the form of a people’s festival. We should not be intimidated by prohibitions.

WW: Can you describe your experience on Saturday?

SC: Unfortunately, I was a little late for the action and arrived a few minutes after 1 p.m., but in those few minutes almost all our comrades in the struggle had already been detained. People just came out of the subway, they didn’t chant anything, they didn’t hold signs, but even so they weren’t allowed to reach the gathering site. There were many police, who were grabbing people indiscriminately.

I still went to the place where I was supposed to meet my comrades. We were few. Without thinking twice, we decided to hold up a banner with the inscription “Capitalism is shit!” and began to march and shout the same slogan. We knew perfectly well that we would not be allowed to walk 20 meters without being detained, but the march was to be held at all costs, and we did everything in our power.

WW: I saw photos and video that showed very brutal treatment of you and other protesters. How long were you detained?

SC: The police tore at the banner and ripped our flags. It was just sick. But not surprising. A normal person does not work for the police. A normal person will not serve a power that robs its people at will. And as for the protection of “law and order,” this is now an empty phrase. The law is in the hands of those who fear their people. On the one hand, the authorities seem strong and invincible, but on the other hand, they show their weakness.

I, like many others, was pinned to the asphalt and then put in a police bus. I was taken to Presnensky police station and asked provocative questions, but I didn’t answer them. There were other comrades in the struggle with me. We were united and not afraid of anything. Many activists were kept in the police department of Moscow for four to five hours. Some were held for a day or two.

We must pay tribute to our comrades who went to all the jails around Moscow to support the detainees and brought us food and water. We didn’t feel abandoned. On the contrary, it was very good moral support.

WW: Sergey Udaltsov of the Left Front, who was only recently released from prison, was jailed for five days. Why was he singled out for punishment?

SC: Udaltsov, like many others, was detained at the exit from the Metro [subway]. He did not violate the law. He didn’t shout any slogans or wear any symbols. The court was provided with video proving this, but still made its decision — five days under arrest. [Udaltsov was released on Sept. 28.]

By the way, the police who detained Sergey explained their actions this way: “Your appearance on the street provokes people and forces them to gather around you.” According to their logic, Sergey is guilty just for showing his face in public.

WW: Why do you think the authorities decided to crack down on the event this year? Is it related to the upcoming World Festival of Youth and Students in Sochi, Russia?

SC: The authorities carried out all this less than a month before the opening of the XIX World Festival of Youth and Students in Moscow — a traditionally leftist and anti-imperialist gathering of young people. What will the leftist visitors from around the world say about this violence in the homeland of the October Revolution? Nothing good.

I’ve heard that many Russian and foreign leftists are not allowed to participate in the upcoming World Festival of Youth and Students by decision of officials appointed by the Russian government. Even initiators and organizers of the event are being excluded!

What the authorities have done is an attempt to stifle the left forces in the capital of the Russian Federation in the centenary year of the Great October Socialist Revolution. You can’t call it anything else.

WW: Thank you for your comments and your efforts!

SC: Thank you for the conversation, support and solidarity! We are also in solidarity with you!