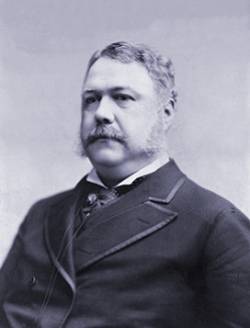 Chester Arthur, the Donald Trump of 1882.

Why does north Korea want nukes? It’s pretty simple, and totally unreported in the corporate media. The U.S. Air Force flattened practically every building and structure there during the Korean War in the 1950s.

It’s not “paranoia” (as we are told again and again and again, using the method of Herr Goebbels that worked so well in Nazi Germany). It’s a rational decision based on the Koreans’ terrifying previous experiences with bombing by the U.S. and their knowledge of U.S. bombing of others, major examples being the Vietnamese and the Iraqis.

The Koreans are Asians, and so the unnecessary, totally racist nuking of Japan — twice, when for all practical purposes WWII was over — must weigh heavily on the minds of Korean military leaders. The recent Korean rocket launches are small compared to the huge, year-after-year military exercise mobilizations the U.S. has been leading since the 1950s. But there is more, much more.

Korea was one of the first countries the U.S. military put in its gunsights to institute and enforce the “blessings” of free enterprise, “or else.” In 1866, trying to “open” Korea as a market for U.S. goods, former U.S. gunship General Sherman, then a commercial vessel but still equipped for war, sailed up the Daedong River, where it was destroyed by Korean defenders.

That was followed by more attempts. U.S. President Chester Arthur sent Navy gunboats to Korea in the 1880s that blasted their way into a forced opening of trade with U.S. businesses.

Chester Arthur was a “good old boy” who knew a thing or two about the benefits of trade and being a middleman. Before becoming president, the well-heeled Arthur had the highest-paying job in the federal government. As head of the New York City Customs House, he received all tariff collections.

His position included the huge perk of appointing about a thousand sycophants as fee collectors, and in turn seeing to all the kickbacks the collectors were required to pay to the Republican Party. His reported income of over $50,000 annually was more than the salary of the president!

Donald Trump was born too late. His corrupt dealings would have raised no issue back in Arthur’s time. Having been born and raised in New York high society, Trump perceives his class privileges and war powers much like fellow New Yorker Chester Arthur did over a century ago.

Remember the Maine? Remember the USS Maddox and USS Turner Joy (ships involved in the trumped-up Tonkin Gulf incident)? Remember that only one senator had a child serving in Iraq? As with Iraq Oil War II, who would benefit from Korean War II? It would be Trump, former ExxonMobil CEO Rex Tillerson and their rich pals, not us!

Tell the children. Don’t let them be bamboozled by patriotic blather into killing for Trump and the Pentagon.