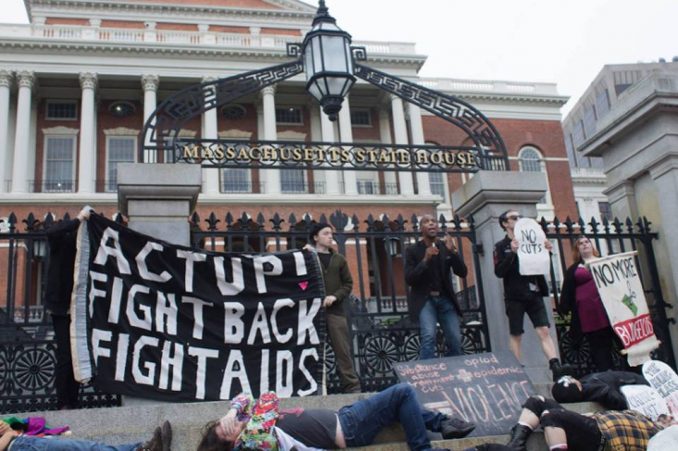 Pastor Franklin Hobbs speaks from the steps of the Massachusetts State House while protesters stage a ‘die-in’ on Sept. 19.

Sept. 25 — In response to Massachusetts Gov. Charlie Baker’s murderous budget cuts to HIV, housing and youth services, protesters staged “die-ins” at the State House and a nearby busy shopping district in Boston on Sept. 19.

Despite thousands of HIV infection cases in Massachusetts and hundreds of new cases each year, Gov. Baker used his line-item veto to cut nearly $3 million to HIV-related services from the state’s 2018 budget. Organizers called upon members of the state legislature to override these cuts, representing millions of dollars in services stolen from the oppressed.

Protesters — led by ACT-UP Boston — leafleted and chanted. Then, each fell down “dead” in coordinated sequence, recalling militant direct actions of ACT-UP during its critical height in the late 1980s and early 1990 in response to the brutal, government-enabled HIV/AIDS crisis that claimed one victim in the U.S. every eight minutes.

ACT-UP has also mounted demonstrations over the years to expose U.S. and European neocolonial pharmaceutical profiteers, who prioritized their bottom line over fighting the massive HIV/AIDS ­pandemic in sub-Saharan Africa.

Youth organizers in Boston — most are younger than the 30-year-old ACT-UP movement — expressed outrage that after three decades, a militant fight for HIV/AIDS and related services is still as necessary as ever.

Accessing treatment for HIV is often insurmountable for those without insurance and stable housing, especially poor and working people, trans, Black and/or Latinx people. HIV infection rates are also high among people who use drugs and face that related stigma disproportionately under capitalism.

Among the programs set to be completely axed by Gov. Baker is Youth On Fire, a highly valued Cambridge program providing beds, meals, overdose prevention and other support for LGBTQ youth and youth with HIV.

An affinity group of ACT-UP Boston, called ACT-UP CLASS WAR — the Coalition of Local Activists and Seropositive Siblings formed to Wipe out Austerity and Racism — mobilized to raise demands beyond the call to urge legislators to overturn budget cuts.

The CLASS WAR group called for securing housing as a basic human right and for ending Boston’s exploding luxury housing market, which has produced mass evictions of longtime working-class and poor residents. They also demanded full, permanent funding for Youth On Fire, as well as additional services that would provide housing for homeless people living with HIV/AIDS and supervised consumption facilities for people who use drugs.

As of this writing, the Massachusetts House has voted to override Gov. Baker’s cuts to 2018 funding for youth homelessness and HIV programs, including Youth On Fire. It remains to be seen if the state Senate will do the same. Two other programs — Residential Assistance for Families in Transition (which includes help for people with disabilities) and support for section 8 vouchers — have not yet received an override vote in either chamber.

People wait anxiously to learn the fate of these budget items that seriously impact their lives. One “die-in” speaker related that they might not survive the winter if the line-item cuts get pushed through.

As true today as it was 30 years ago, in the face of capitalist austerity, “Silence is death.”