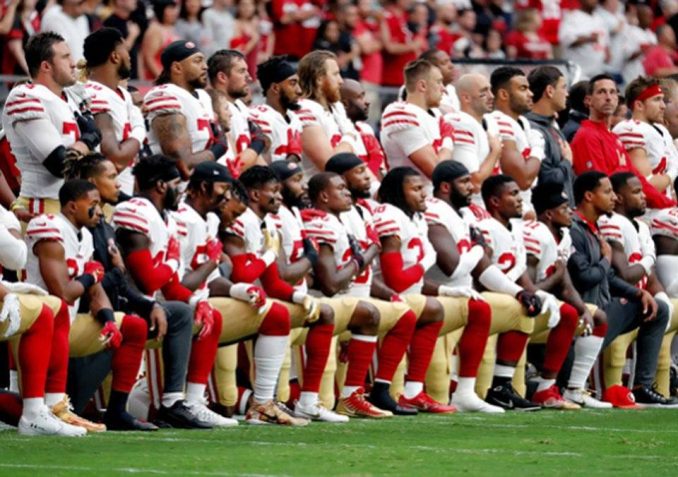 These recent protests were ignited by Donald Trump’s racist rants during a Sept. 22 Republican rally in Huntsville, Ala., when he called for the firing of any player who specifically sat or knelt during the anthem. He also insulted these players and their mothers by referring to them as “SOBs.”

In response, more than 200 NFL players took part in an unprecedented display of solidarity against Trump’s remarks on Sept. 24 and Sept. 25. The NFL players are 70 percent African American.

Following these protests, Trump continued his attacks on the players by tweeting to NFL owners that they were “afraid” of firing the players, who he said “disrespected” the flag and anthem.

Colin Kaepernick, the Black former San Francisco 49ers quarterback, was the main lightening rod for these protests when he took a knee during the 2016 NFL season to bring more national attention to the police killings and racist oppression that plague Black and oppressed communities.

Now into the second month of the 2017 season, Kaepernick remains unemployed, as no team owner has hired him.

Even though the number of players who protested Oct. 1 was smaller compared to those last week, 15 players from Kaepernick’s former team, the 49ers, knelt during the anthem, while 15 other players stood behind them, putting their hands on the backs of their kneeling teammates in solidarity. Three members of the Miami Dolphins, including outspoken player Kenny Stills, knelt.

Six members of the Buffalo Bills, along with a large number of Baltimore Ravens, knelt before the anthem played, and were still booed by majority white fans.

Oakland Raiders running back Marshawn Lynch wore a “Trump vs. Everybody” shirt. The Raiders staff surrounded Lynch so he would not be photographed while sitting during the anthem.

The Carolina Panthers’ Black quarterback, Cam Newton, gave a “Black power” salute in the end zone as a call for solidarity after scoring a touchdown on Oct. 1. Newton is a strong Kaepernick supporter.

Many athletes from different sports continue to kneel to protest inequality, including high schoolers.

Black athletes have historically used sports as a platform to help forward the struggle for racial equality and national liberation, most notably Joe Louis, Jackie Robinson, Wilma Rudolph, Muhammad Ali, Tommie Smith, John Carlos and now Kaepernick. Sports is an important part of U.S. culture that socially brings together many nationalities, generations, genders and gender expressions, despite the super-exploitation of athletes for bosses’ profits.

The NFL remains the most popular pro sports league in the U.S. Therefore, no matter the wide spectrum of political views on the role the U.S. flag, the military and the anthem play in the protests, in general these athletes have taken an important step forward by using their visibility as athletes in the fight against white supremacy and police brutality and in solidarity with Kaepernick’s fight to be signed to a NFL team.

These players have become important allies in the ongoing Black Lives Matter movement that emerged following the vigilante murder of 17-year-old Trayvon Martin in 2012.

As Bryant Gumbel stated on HBO’s “Real Sports,” “Thanks, Trump, for energizing social consciousness of all athletes to stand for something.” Many of these players are acknowledging in their actions what ESPN’s sportscaster Jemele Hill said on Twitter in early September: Trump is a white supremacist.

As their class consciousness deepens, many of these players will also come to realize — like millions of other workers — that their interests are diametrically opposed to the billionaire owners’ interests to make profits from their athletics. While a large number of players are forced to cut their football careers short due to devastating, chronic injuries, the bosses fight tooth-and-nail to deny them long-term health coverage.

The owners may be upset with Trump for demanding that they fire protesting players, but these same owners are also doing everything possible to persuade the players not to use the platform of the playing field to protest, calling it “divisive.”

The actions of the NFL athletes are encouraging others to take a stand, especially against police brutality. A group of white residents in Queens, N.Y., held a banner Sept. 22 inside Mets stadium, home to the New York Mets, while the anthem played. It read, “This is us taking a knee. Black Lives Matter.” They had consulted with their Black neighbors beforehand to get approval for their protest. It was a powerful, symbolic display of anti-racist solidarity.

Despite any racist backlash, these players in the long run will continue to resist the pressures from the powers that be — from the mainstream media to the team bosses — to just stick to sports. It reconfirms the Marxist view that no struggle takes place within a vacuum. No struggle can be isolated from the general society, especially when white supremacy is so prevalent.