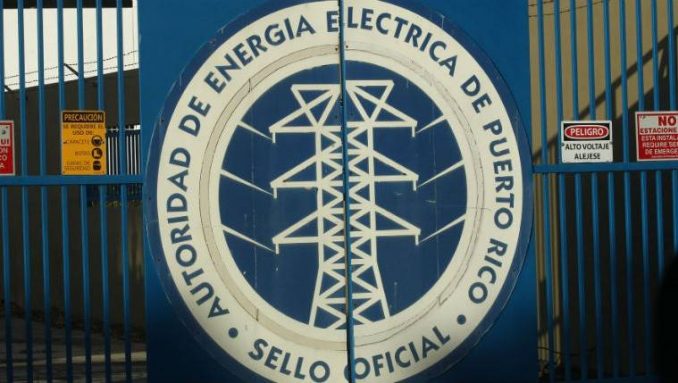 Since 2007 approximately 75 percent of the $9 billion to $11 billion in bonds issued by Puerto Rico’s Electric Power Authority (AEE in Spanish), allegedly to repair and maintain the electrical infrastructure, has instead gone to pay debt service, termination fees on interest rate swaps, and fees to financial advisers on the $9 billion in bonds owed by the utility.

The effects of this usury on AEE, as well as other sectors of the Puerto Rican economy, left the electric company in complete disrepair even before the recent hurricanes.  For much the same reason, the people of Puerto Rico now face at least six months with no electricity. The debt service imposed by the banks and financial institutions has led to huge increases in electricity rates for the poor.

What follows is a brief summary of this usury practiced by finance capital. These facts are taken from a report titled “Wall Street’s Power Grab in Puerto Rico,” prepared by the Refund America Project of the Action Center on Race & the Economy. This report and others on the austerity imposed on Puerto Rico by the banks can be found at refundproject.org/#puerto-rico.

AEE’s bonds are triple exempt, meaning that investors don’t pay state, local or federal taxes on them, which means they are considered great investments for financial institutions.

A June 2015 study by the Puerto Rico House of Representatives’ Small and Medium Businesses, Commerce, Industry and Telecommunications Commission found that of more than $11 billion in AEE bonds issued between 2000 and 2012, only $2.7 billion was dedicated to capital projects. One hundred sixty-five million went to financial “advisors” for fees, and the rest, more than $8.5 billion, went to interest payments and to refinance earlier debt.

More than $2 billion of the proceeds from AEE bonds from 2007-13 was allocated to paying older debt and debt-related fees such as capitalized interest, lines of credit and swap penalties. Rather than being used to fund infrastructure improvements, the bonds were used primarily to make interest payments on debt and pay off previously issued bonds and interest rate swaps.  Only about 31 percent of bond revenues since 2007 were allocated to AEE’s construction fund to upgrade and repair infrastructure.

The banks underwrote bonds that pushed final maturity of the debt beyond the Puerto Rican Constitution’s 30-year limit.

Banks like JP Morgan and Chase collected at least $65 million in termination penalties on interest rate swaps connected to AEE bonds. These banks underwrote the original bond deals that included the toxic swaps — giving them multiple paydays on the same bonds. This is at least a conflict of interest and potentially a violation of securities law.

AEE bonds with a principal of $822 million issued in 2010 were underwritten by Citigroup and JPMorgan Chase. At least a quarter of the bond proceeds was designated to repay a line of credit with these institutions.

The ratings agencies Standard & Poors, Moody’s and Fitch gave AEE positive investment grade ratings for major bond offerings as late as 2013, despite knowing that AEE did not have revenues sufficient to cover the debt. They did so because they are funded by the banks who pay them to rate the bonds.

Wall Street pressured AEE into an unfair debt restructuring when it was clear AEE was heading to a default on the bonds.  This pending default was precipitated in part by the same bond agencies, which had fraudulently rated the bonds investment grade, downgrading AEE’s investment grade in 2014.

Hedge funds like Blue Mountain Capital, Oppenheimer Funds Inc., Mass. Mutual Life Insurance, Goldman Sachs and Franklin Resources purchased the bonds for 50 cents to 60 cents on the dollar. They then pushed AEE into a restructuring agreement that allows for automatic rate increases for AEE customers when energy use declines due to people being unable to afford their electricity or leaving the island entirely.

When Puerto Rico filed to restructure its debt under the Puerto Rico Oversight, Management and Economic Stability Act (Promesa) in May, the $9 billion in AEE debt was not included in the filing. After Gov. Ricardo Rosello took office this year, he negotiated a revised restructuring agreement with an effective repayment rate of 85 percent on the bonds, despite the fact that Puerto Rico could afford to pay only about 25 percent of the existing public debt.

Further fleecing AEE and the people of Puerto Rico, financial “advisors” like Alix Partners were paid enormous fees, way over the norm and twice the original estimates for their involvement in the restructuring.

The people of Puerto Rico have every right to demand that the debt to the banks and financial institutions be canceled and that these robbers be forced to fund the reconstruction of the island and its infrastructure.