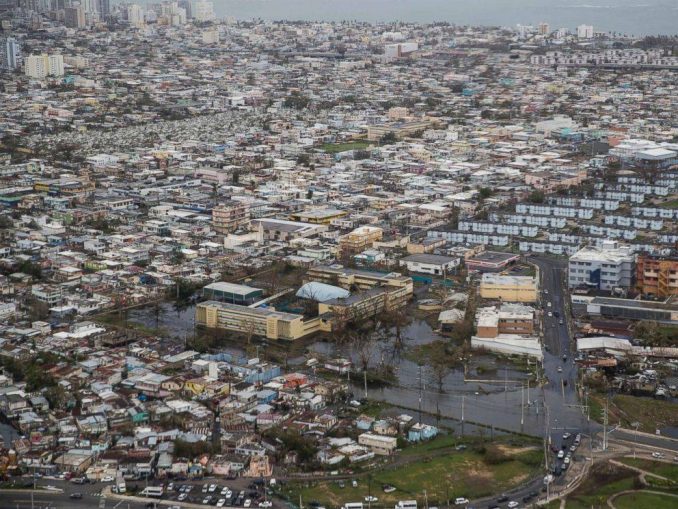 As of Sept. 25, two weeks after Hurricane Irma and five days after yet another deadly storm, Hurricane Maria, hit the archipelago of Puerto Rico, the total damages inflicted on this U.S. territory-colony are still not known.

Images shared on social media show vast devastation: collapsed houses, rooftops gone, trees and electricity poles downed, vegetation gone, as if a fire had engulfed the previously lush foliage. The pictures of entire neighborhoods flooded remind us of the terrible scenes showing Hurricane Katrina’s effect on New Orleans: Some neighborhoods have just been wiped out. The impact on the mountain regions is still not accounted for. No area has been spared, as shown in aerial views presented on some news websites.

Bridges, roads and other infrastructure were destroyed, further complicating the isolation of entire cities that have not been able to communicate with the rest of the country. The whole country has been without electricity for days. There’s no safe water, either, due to the need for electricity to power the pumps. Telecommunication is almost nonexistent. Only a few radio stations can broadcast, most of them AM.

Cellphones are mostly useless now, since only a few spots have a signal. For example, cars line up on the Teodoro Moscoso Bridge in the San Juan area in order to access the limited signal available there.

Even the government cannot communicate with its own agencies throughout the country. The now-privatized mobile network depends on electricity. Most of its facilities do not have backup generators, which the formerly public PR Telephone Co. used to have. This, together with fallen towers, has caused a communications desert at a very critical time. Amateur radio aficionados and satellite phone users are trying to compensate for this lack of connection.

The desperation of families not knowing about the fate of their loved ones is relieved by a spontaneous network of social media — particularly through Facebook — and the available radio stations, which together operate as a connecting link, passing information between Puerto Ricans in Puerto Rico and those in the diaspora.

The lack of electric power and also of vital medical supplies has shut down small hospitals and health facilities. After the Medical Center in Rio Piedras got its electricity back, it was set up as the main health service hub.

Electricity is a major problem in Puerto Rico. For years, several bourgeois government administrations have tried to privatize this vital state industry. Only the people’s struggle, particularly the fightback of the workers in the UTIER union, have prevented complete privatization.

However, the PR Electric Power Authority (AEE in Spanish) has reduced its workforce by half in the last few years and has failed to maintain the infrastructure, letting it deteriorate in order to make the people accept its privatization as the only way to prevent repeated power outages and higher electricity bills.

This cost cutting is in order to “repay” a $9 billion “debt” in municipal bonds, which is AEE’s share of the more than $73 billion of illegitimate “public” debt the government is expected to pay to Wall Street bondholders.

In addition to payments on the bonds issued, recent policies imposed on the AEE by the U.S. through the consultant firm Alix Partners have reduced the inventory of materials needed for the generation of electricity, without taking into consideration the fact that, in extreme weather, AEE would be unable to receive these materials via shipping.

Because Puerto Rico is a three-island colony that used to be self-sufficient in agriculture but whose economy has been destroyed and instead developed to satisfy its master’s hunger for profits, it depends on shipping, mostly from the U.S., to receive 85 percent of its food and supplies. Being a colony, it is subject to criminal U.S. impositions like the Jones Act, which requires all shipping to Puerto Rico be in U.S. vessels, with U.S. personnel, making it the most expensive in the world.

As a consequence, Puerto Rico cannot receive aid from other countries that have offered crucial help, like Cuba and Venezuela.

Before any government help arrived in many communities, neighbors were reported to be helping themselves in an organized way.

One message that appears in many reports, both in regular commercial media as well as from individuals using social networks, has been the extraordinary capacity of resilience and cooperative work shown by the people. In photos, even small children can be seen clearing fallen tree branches from the roads.

The overall sentiment expressed is that even though they lost their material possessions, the people feel lucky they are alive, describing the hurricane experience as something apocalyptic. In fact, it is the worst hurricane to hit Puerto Rico since 1928.

Message after message has been an uplifting “Puerto Rico will be stronger.” This is a very welcomed statement at a time when the criminal Fiscal Control Board appointed by the U.S. Congress to pay the wealthy bondholders has been imposing austerity measures that are suffocating the population with layoffs, increased taxes, cuts in health and education, and attempts to privatize the energy sector.

The important step now is for this effort of unity in action to be translated into political action for the liberation of the Puerto Rican nation.

As a recent leaflet distributed by Puerto Rican activists in Philadelphia, titled “What help do we need from the United States? REPARATIONS AND INDEPENDENCE,” reads:

“IT IS TIME TO PAY. What we need now is for the U.S. to repair the damage it has done to us. Here are some examples: for the forced sterilization of our women; for the contamination of waters, air and soil by petrochemicals, coal, pharmaceutical and military plants; for the destruction of Vieques and Culebra by the U.S. Navy; for the death of thousands of young people in wars with which Puerto Rico had nothing to do; for the imposition of a merchant marine that does not let us trade with other countries. For these and many other reasons we demand: Cancel the odious debt! REPARATIONS NOW! Sovereignty with Independence! No criminal Fiscal Control Board!”

Joubert-Ceci is a Puerto Rican woman from the southern city of Ponce who, as of the writing of this article on Sept. 25, has not yet been able to communicate with her relatives on the island.