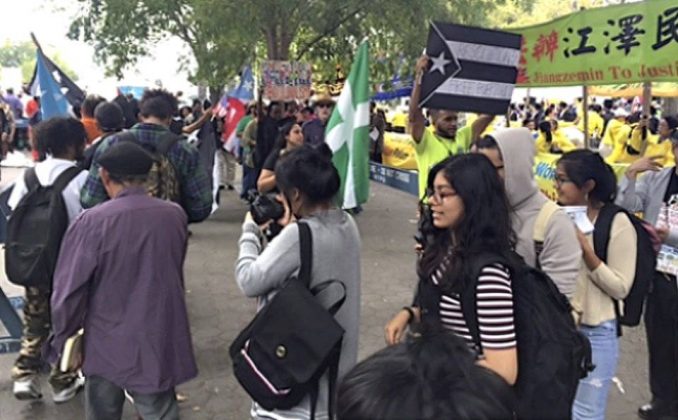 The struggle for sovereignty for Puerto Rico was the theme of an all-day protest Sept. 19 across from the United Nations. New and longtime activists in the Puerto Rican diaspora and friends were present to rally, chant, raise flags and exchange information with people from many other nations facing or overcoming colonial oppression.

The occasion was the 72nd session of the U.N. General Assembly with its 198 member countries. The demand was that the U.S. comply with resolutions that the U.N. Special Committee on Decolonization has already passed — 36 times! — on self-determination for Puerto Rico.

Damage from Hurricane Irma limited participation from the Florida-based Unión Patriótica Boricua, which was inspired to call the rally by the winning of freedom for Puerto Rican political prisoner Oscar López Rivera in June. The threat of Hurricane Maria hung over the Caribbean as the rally progressed.

Despite this, 100 people came out on a work and school day for a spirited, nonstop picket line. They kept up militant chants mainly in Spanish, with singing, drumming and traditional instruments that caught the attention of everyone in the area.

At different points in the day, the gathering was joined by students from Mexico, activists from Black Lives Matter, supporters of Palestine and performance artists in the battle against New York City’s colonizer Columbus statue.

Participants gave out flyers to passersby explaining the United States’ colonial hold on Puerto Rico, from the 1898 invasion to the 2016 Promesa (Puerto Rico Oversight, Management, Economic Stability Act), which, in effect, calls for closing schools and hospitals, selling off beaches and cutting workers’ wages — all to make sure foreign banks can collect $70 billion of so-called debt.

In the aftermath of the two storms, many of these same activists are now collaborating to collect donations and material aid for Puerto Rico at community locations such as the El Maestro Center in the Bronx.

On Sept. 21 at a solidarity rally for Zimbabwe, a statement from that country’s president, Robert Mugabe, was read by revolutionary Viola Plummer, expressing “condolences to the people of Puerto Rico and other nations devastated by natural disasters such as hurricanes and earthquakes” and concluding that the world “demands more, not less solidarity.”