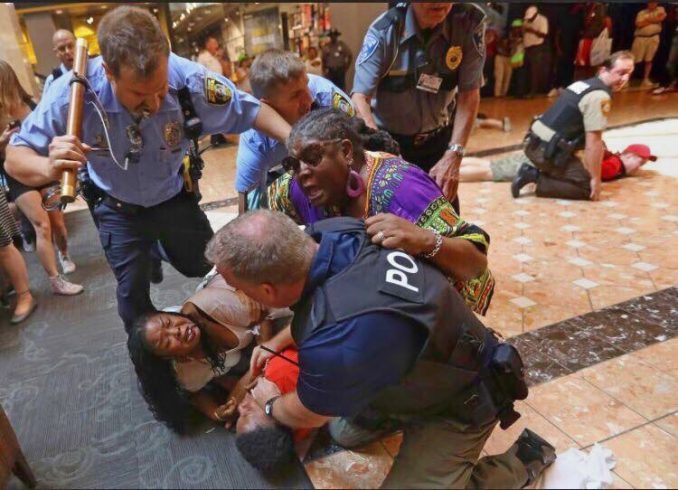 Fiery St. Louis protests continue nonstop despite brutal police violence against demonstrators that is drawing criticism from city officials, reporters and the community.

Protests first erupted on Sept. 15, immediately after the acquittal of a white cop, Jason Stockley, accused of murdering a young Black man, Anthony Lamar Smith. Stockley was released despite damning evidence against him.

During several days of protest, on Sept. 17, the following Sunday evening, police surrounded demonstrators in a move called kettling. Without warning they closed in, using excessive force and chemical weapons to arrest everyone, over 120 people.

The American Civil Liberties Union is suing St. Louis police for “unacceptable, unlawful and unconstitutional” behavior and for dispersing a crowd engaged in constitutionally protected assembly. The suit accuses police of ramming a police car into a dispersing crowd, the use of kettling, excessive force, chemical sprays, illegal arrests and destroying people’s video footage of the cops’ actions.

Mayor Lyda Krewson criticized police for derisively shouting “These streets are our streets,” mocking a political slogan used by demonstrators: “Whose streets? Our streets!” However, protesters say that the mayor continues to take the side of the police. They are demanding that Krewson and the city address the racist behavior and escalating repression by city police.

Many protesters caught in last Sunday’s “kettle” were knocked down and cuffed. Cops removed their goggles and sprayed them directly in their face.  Several people who were not demonstrating were arrested and complained that they could not escape.

The St. Louis Post-Dispatch reported that an undercover police officer, unrecognized by other cops, was knocked down, cuffed and hit several times. The mayor is asking for an investigation into how cops treated that officer. (Sept. 23)

Drew Burbridge, a visiting filmmaker, didn’t hear cops telling the crowd to disperse. He was caught in the kettle, pushed to the ground, grabbed and dragged away. He reported being sprayed with chemicals, knocked unconscious for 10 to 30 seconds and pepper-sprayed again when he came to. The mayor has not so far asked for an investigation into his case.

U.S. Air Force Lt. Alex Nelson, who lives in the neighborhood, was trapped in the kettle, kicked in the face and blinded by pepper spray before being dragged away and arrested. The Associated Press reports that Nelson said, “I hear the police say it was their street, but it’s literally my street. I have coffee on that street, and I own property on that street.” (Sept. 23)

Prosecutors claimed that minutes before fatally shooting Smith five times on December 12, 2011, Stockley announced his intent “kill this motherf**ker, don’t you know it.” They say Stockley planted a gun in Smith’s car which was covered with DNA from Stockley, but none from Smith.

The St. Louis demonstrations echo the 2011 Ferguson protests that helped give rise to the Black Lives Matter movement. In Ferguson, just 15 miles from St. Louis, protests erupted after the acquittal of another white cop, Darren Wilson, for the killing of unarmed teenager Michael Brown.