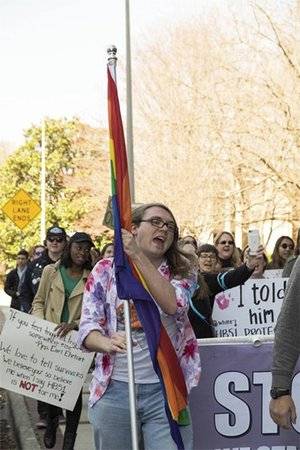 Warning: This article contains a graphic depiction of a shooting death of a transgender person.

In the continuous war on transgender people, another life has been senselessly taken, this time at the hands of a particularly violent arm of the capitalist state: the police. On Sept. 16, Scout Schultz, a bisexual, intersex, nonbinary student and activist at Georgia Tech, as well as head of Tech’s Pride Alliance, was shot dead by campus police officer Tyler Beck.

This tragic event is being portrayed as “suicide by cop.” But it could have been prevented … Scout should still be here, and there should have been no tragic death of a transgender person suffering from a mental health crisis. In a haunting video released by a student who recorded the incident from their dorm room, Scout is seen approaching Officer Beck with what was later revealed to be a small multi tool with no blade extended. Beck, who had received no training in crisis intervention — the program teaching cops how to deal with a mental health crisis — told Scout to drop the knife. But they continued, telling Beck to shoot them. Beck, instead of attempting to disarm Scout, shot and killed them instead.

In 2017, twenty-one transgender people have been murdered, and Scout is not the first transgender person killed by police this year. On Aug. 22, Kiwi Herring, a Black transgender woman, was killed by St. Louis police after an altercation stemming from being harassed by a neighbor.

It is easy for reactionaries and “devil’s advocates” to say, “Well, if they didn’t want to die, they shouldn’t have attacked the police.” But it is more complicated than that.

We know that the police in the U.S. wage a perpetual war on transgender people. Since at least the 19th century, police have routinely arrested and abused transgender people on counts of cross-dressing, sodomy, solicitation, etc. This abuse continued into the 20th century and resulted in queer and transgender revolts such as the Compton Cafeteria Riot in California and the pivotal Stonewall Riots in New York City.

The key role of transgender defiance in these uprisings has been swept under the rug by the ruling class as well as by the rising of a gay elite, connected in their pro-capitalist, pro-imperialist pandering to the ruling class. We know that cops’ perpetual assault on transgender people, like that of all cops who assault, rape and murder working-class people, is why this killer cop, Tyler Beck, is being defended.

This incident digs deeper into the issue of how transgender people are not only abused and mistreated by those “sworn to protect,” but by a capitalist state that purposely neglects trans rights and trans people. Scout had survived a suicide attempt in 2015 and was attending counseling services. As of 2015, 41 percent of transgender people reported attempting suicide. (ustranssurvey.org)

It’s no coincidence that transgender people within the U.S. face higher amounts of poverty, discrimination, harassment, violence and murder. All of this piled up together is enough to overwhelm anyone, and with the continued targeting of transgender people by the ruling-class powers in Washington, D.C., who are doing everything they can to crush the support network that trans people have built, it is understandable why mental health issues are surging in the trans community.

These issues are doubled for trans people of color, especially Black trans people, who are at many different oppressive intersections and suffer from higher rates of mental health crises.

Even if that resistance exists at the same time with feelings of despair and dismay with oneself, as it did for Scout Schultz, we acknowledge Scout, like all martyred trans people, as a hero and a comrade. We go forward in our fight for liberation and socialism with them, and all other transgender people, in our words and actions.