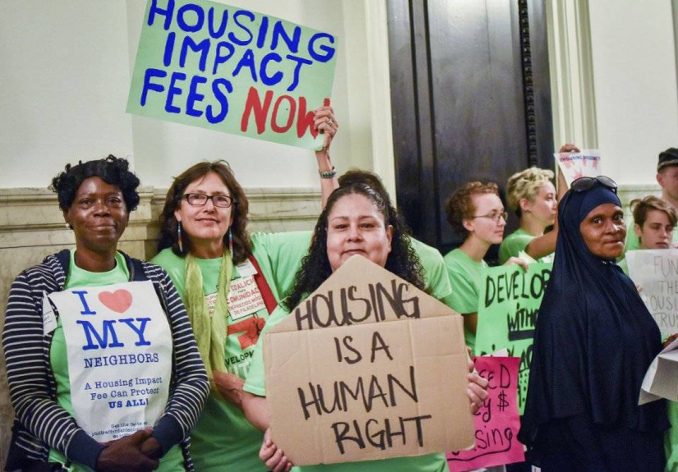 About 50 housing activists from the Philadelphia Coalition for Affordable Communities converged on a City Council meeting on Sept. 14 to demand a construction impact tax to offset the effects of gentrification on poor neighborhoods. The coalition is made up of 59 community groups, including the Food and Commercial Workers; American Federation of State, County and Municipal Employees District Council 47; United Home Care Workers of Pennsylvania; and other area unions.

Many Philadelphians agree with Demetrius Richardson, from the Point Breeze section of this city, whose complaint is featured on the PCAC website: “Today, the neighborhood is gentrifying, and I AM all for beautification of the neighborhood, but we built this community for the people that lived here, and now they can’t afford to stay and other people are calling the shots.” (phillyaffordablecommunities.org)

Between 2000 and 2014, this city lost over 23,000 affordable housing units, defined as having rents plus utilities costing less than $750 per month.

Philadelphia ranks first among the 10 largest cities in the U.S. for the number of families living in poverty — 25.7 percent. (Philly News, Sept. 13)

In fact, for the estimated 128,900 households in this city earning less than $15,000 per year, gentrification is making it impossible to stay in their homes.

Gentrification mostly impacts the Black community in Philadelphia. Between 2000 and 2012, the African-American population in gentrifying neighborhoods decreased between 22 percent and 29 percent, according to the U.S. Census Bureau. Increased housing costs are one reason for this. But, in addition, wealthy developers, in order to clear neighborhoods of poor people, push for “stop and frisk” and other racist police policies that criminalize and attempt to justify the use of violence against Black and Brown people.

The PCAC’s proposed bill would set a tax per square foot of development, which would be used to fund affordable housing or other community uses. This legislation is far from a radical idea. Nevertheless, organizers have tried for several years to get legislation passed that would limit gentrification’s negative effects on our most impoverished communities — without success. The developers and bankers have had controlling influence on this city’s political structure for decades.