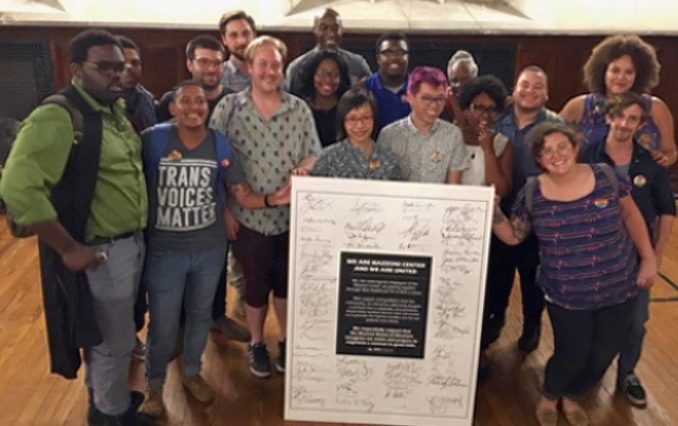 In a victory for service workers and the LGBTQ community, Philadelphia’s Mazzoni Center front-line staff voted 51-34 in favor of unionization on Sept. 13. The vote for Service Employees Union (SEIU) representation follows walkouts and protests over the past several months organized by the nonprofit center’s staff in response to serious management problems.

Protests have dealt with issues ranging from negligence within the administration, failure to investigate sexual misconduct, and allowing racist, classist and transphobic institutional practices to flourish. Recently, workers demonstrated against the hiring of an alt-right, anti-union consulting firm.

Before the vote on unionizing ended, activists with the Black and Brown Workers Collective, union organizers and patients gathered outside Mazzoni, encouraging staff to vote yes. “That’s the best way for them to be supported,” said one Mazzoni patient. “[Unionizing] is going to just help them provide better care. … The patients have their back.” (GPhilly, Sept. 13)

The vote to unionize at Mazzoni is a step toward creating social support services capable of reaching the most marginalized members of the LGBTQ community. Mazzoni staff are part of the larger fight against racism, transphobia and classism in Philadelphia’s “Gayborhood” and its LGBTQ institutions.

The BBWC demonstrated against oppression on June 1, 2016, in the HIV/AIDS nonprofit sector in Philadelphia, specifically addressing Philadelphia FIGHT, an AIDS service agency. Workers World/Mundo Obrero reported: “Black and Brown workers have been targeted and even fired for speaking out against FIGHT’s oppressive practices. Shani Akilah, who was one of those fired, said: ‘Workers are united to demand justice and a change in organizational culture. FIGHT has a long history of this type of discrimination. We are tired of the retaliation. Workers who are still on their jobs are united with us.’”

The Mazzoni staff’s decision to unionize empowers workers in the nonprofit sector as well as LGBTQ workers who need affordable, accessible services.