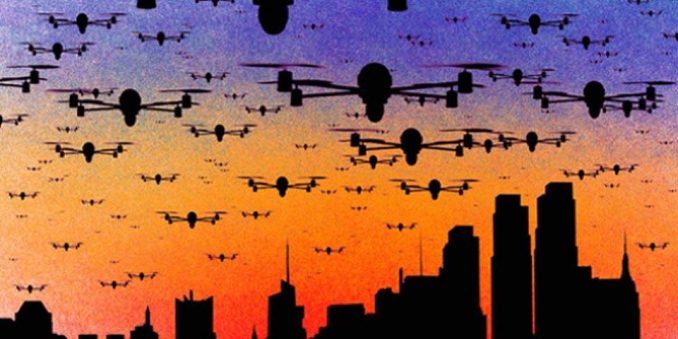 U.S. war crises and threats are intensifying on every side of the globe, from Korea to Afghanistan, from Venezuela to Yemen. Meanwhile, superstorms are exposing deadly weaknesses in the U.S. industrial infrastructure, while economic foreboding erodes confidence in the midst of a dizzying stock market surge that looks like a bubble ready to burst.

Are the escalating and diverse crises a sign of a deeper systemic problem?

A recent study by a Department of Defense think tank weighs in on this discussion, and its evaluation gives a dire warning to the strategists of U.S. imperialism. Its solution, however, projects the same old militarist practices that it admits have already failed to deal with the escalating crises.

The 116-page study, entitled “At Our Own Peril: DoD Risk Assessment in a Post-Primacy World,” is the product of a year-long U.S. Army War College and Strategic Studies Institute research effort. The combined report includes participation of military think tanks.

Labeled a Joint Chief of Staff Report, it says a fundamental change is underway that can only be ignored “At Our Own Peril.”

What is of note is that the U.S. military itself recognizes this deteriorating U.S. position. In a “post-primacy world,” it says, the U.S. is no longer an unchallenged number one.

A July 17 article in Alternet by Nafeez Ahmen, headlined “Pentagon Study Declares American Empire Is ‘Collapsing’,” pulled out some key quotes from the report that capture the mindset of the military analysts.

“[The] U.S. can no longer count on its unassailable position. … Nor can it rely on dominance it enjoyed for 20-plus years after collapse of Soviet Union.

“Global events will happen faster than DoD is currently equipped to handle, being outpaced by world events.

“In brief, the sta­tus quo that was hatched and nurtured by U.S. strategists after World War II and has for decades been the principal ‘beat’ for DoD is not merely fraying but may, in fact, be collapsing.”

Of course, the authors may exaggerate the chance of “collapse” in order to attract more funding. Their solution still presents a dire threat to the rest of humanity: Pile on more of the same military expansion.

Still, there are areas where the U.S. has really been less than dominant. In Afghanistan, nearly 16 years of occupation have led nowhere.

Six years ago Washington demanded that the entire government of Syria must resign and a government handpicked by imperialism must come to power. Now determined forces of the Syrian government, with assistance from Russia, Iran and Hezbollah, have pushed back the brutal war for regime change and turned the tide.

The response of the Democratic People’s Republic of Korea to U.S. nuclear threats and extensive war games is to again call for signing a peace treaty and ending the threats. “The time of dictating orders by brandishing U.S. military might has gone,” said the DPRK’s foreign minister. (Al-Jazeera, April 17)

Threats of a coup, extreme shortages and sabotage rained down on Venezuela if it dared to move forward on holding a democratic election July 30 for a Constituent Assembly, a body really representing all the sectors in society. Venezuela dared to go ahead.

Today Syria, People’s Korea and Venezuela are not safe. But they have fiercely resisted and survived.

The report defines the major problem the U.S. faces: “Generalized disintegra­tion of traditional authority structures … fueled, and/or accelerated by hyper-connectivity and the obvious decay and potential failure of the post-Cold War status quo.”

Most dangerous is the release of “Facts that challenge legitimacy.” This means, for example, the courageous exposés carried out by Chelsea Manning and Edward Snowden, who dared to release highly classified information of criminal activity by the U.S. government and the Pentagon.

“Facts that challenge legitimacy” is a fairly accurate description of the impact of their actions.

What is the report’s goal?

So what is the U.S. Army War College report really saying and to whom is it directed?

The report is being used as an imperialist wake-up call. It is making the rounds to influence think tank members, policy makers, talking heads, corporate media and the small billionaire class.

The report is directed at every millionaire in the Senate. Such reports shape the pitch from lobbyists and funders behind every congressional campaign and speak to the billionaire media CEOs, the biggest banks, the oil, gas and military corporations.

This report tells them: Your rule is coming to an end, unless you get totally behind us and really take the gloves off.

• Weaponization of information and disinformation

• The U.S. and its “partners” must have “unimpeded access to air, sea, space, ­cyberspace.”

Why? Because the U.S. empire must “maintain global access to resources.”

With “loss of primacy,” expanding the U.S. military is the only option. This is the only option that a system driven by maximizing profit is capable of offering. The superprofits of the military-industrial complex are imperialism’s lifeblood.

The unsolvable contradiction is that while it needs war to sustain its empire and keep its system afloat, such horrendous social expense and the global hatred it arouses are what will help bring this corrupt system down.

U.S. imperialism has the capacity in one launch to end life on earth, and it can use this threat particularly against countries that have no nuclear capability. Yet it brings nothing to win hearts and minds — no improvement in life, only weapons that create mass hatred and burning resistance.

Drone technology is enormously powerful. But even that has contradictions. Military planners face a growing problem: They cannot block access to the simplest forms of technology that are available on a world scale.

A small, off-the-shelf drone camera and a laptop can map the inside of a U.S. base or a command post. A cell phone can set off an explosion.

In Afghanistan, Pakistan, Iraq, etc., the U.S. military depends on an array of drones to snoop on and stalk insurgents. But increasingly insurgents are tapping into those same drone broadcasts.

As the U.S. War College Report laments, “[The] Pentagon can no longer rely on secrecy and operational security. … In the end, senior defense leaders should assume that all defense-related activity from minor tactical movements to major military operations would occur completely in the open from this point forward.”

A major sorrow expressed in the report confirms the power of global solidarity: “One of the biggest threats is uncontrolled spread of information.”

It is more important than ever to understand the power of determined resistance.

The response to this report — and to the proposed further expansion of U.S. militarism — must be to help shape a consistent worldview that builds opposition to all U.S. wars, interventions and sanctions.

Connections are needed with all the forces involved in resistance in the U.S. — from Black Lives Matter and the Take ’Em Down movements, from solidarity with immigrant activists to all those under attack. Meanwhile, we also need to build a strong, united international movement with all forces resisting globally.