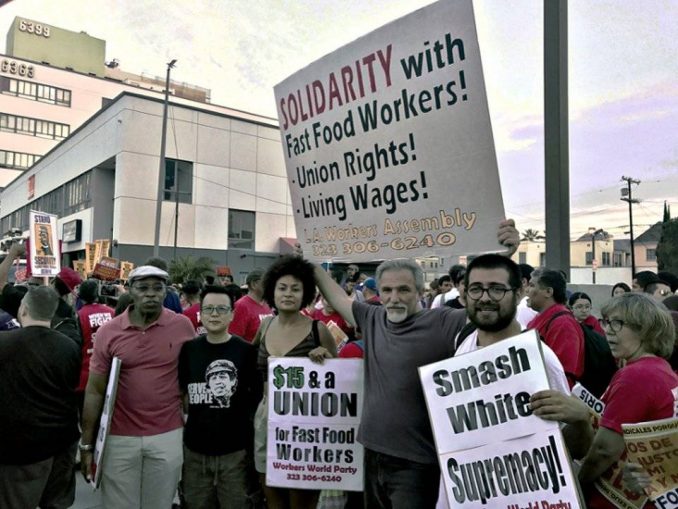 On Labor Day 2017, along with traditional union parades, workers in U.S. cities from coast to coast held direct actions supporting the fight for $15/hour and calling for unionization of low-wage workers. Demands were raised for equal pay, especially for Black women workers who receive the lowest wages while facing rampant racism. Opposition to the elimination of DACA was heard in cities with larger immigrant workforces.

In Buffalo, N.Y., Buffalo Democratic Socialists of America, Buffalo Roja y Negra, Black Lives Matter and Workers World Party-Buffalo joined with Food and Commercial Workers/ChangeWalmart.org on a picket at McDonald’s in solidarity with low-wage workers fighting for what’s theirs — the right to $15/hour and a union. Together they marched to take their history-changing place as one of the leading contingents in the Labor Day parade held by the Buffalo Central Labor Council on Sept. 4.

A Chicago South Side rally on Sept. 4 organized by BYP 100 honored the too-often-overlooked contributions of Black women and femmes to the struggle for economic and social justice. The demonstrators then marched to Oak Woods Cemetery and the burial site of famed civil rights fighter Ida B. Wells — which is marked by only a small, nondescript gravestone — and demanded that a properly respectful monument to Wells replace the insulting federal monument to pro-slavery soldiers that currently mars the cemetery. 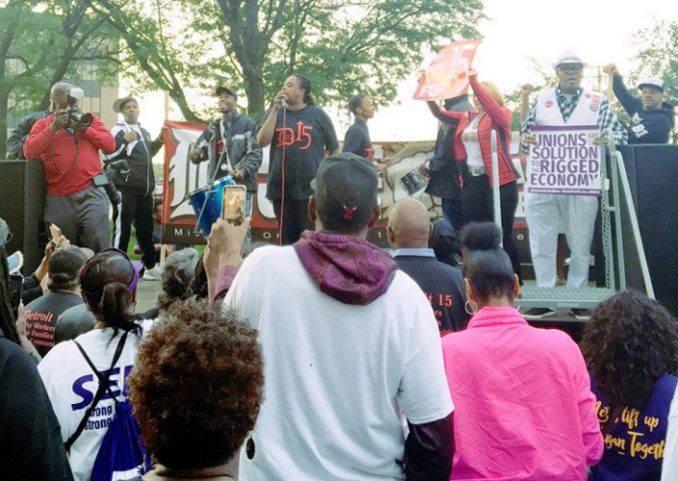 Members of the #D15 coalition assembled for Labor Day before dawn Sept. 3 in Detroit’s rapidly gentrifying New Center area. Their march began outside of an old McDonald’s, nestled between new condo developments. As the day broke, they marched toward Henry Ford Hospital, whose food service jobs were the subject of their latest campaign. The #D15 coalition is composed of low-wage workers, clergy and Service Employees Union organizers from national campaign #fightforfifteen. They all united around one campaign: “$15 and a union!”

SEIU International Secretary-Treasurer Gerry Hudson made a striking comparison between the appallingly low wages in Detroit and those in other areas. “We got organizers here from California, from New York, from all over the country, here in Detroit. It’s a damn shame that in the heartland of labor, brothers and sisters at this hospital are making $9 an hour.

After that rally dispersed, the participants regrouped at Detroit’s 20,000- strong Labor Day parade. Democratic hopefuls made appearances at both rallies, saying they had the workers’ backs. But the workers know that with or without the corporate Democrats’ help, the struggle is up to them. They summed it up with the chant, “When we fight, we win!”