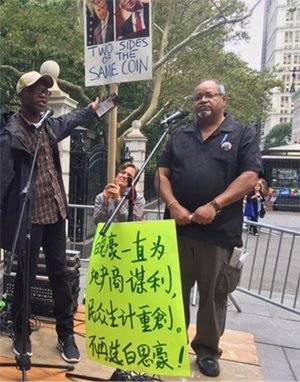 At New York’s City Hall, Johnnie Stevens from the Oscar-Mandela Committee addressed a protest on Sept. 8 aimed against Mayor Bill de Blasio’s housing policies, which are displacing thousands of people. He blasted the mayor’s pro-big-real-estate rezoning plans as “racist to the core.” This was illustrated by a placard depicting both de Blasio and billionaire businessman President Donald Trump.

Ed Figueroa of the South Bronx Community Center chaired the rally and introduced speakers, including Yu Qiong of Local 318 of the Restaurant Workers Union and Marina Figueroa of the East Harlem Preservation

Organization. They expressed anger at elected representatives who don’t represent the working class, and particularly, communities of color.

When speaking of the displacement of workers and communities of color, Stevens denounced the culprits. “This is Wall Street!” he asserted. And he urged the building of a broad movement to stop millionaire developers and de Blasio.

This protest was called by the Citywide Alliance Against Displacement and drew a large delegation from Chinatown. This community has rallied with friends and neighbors from the Lower East Side and the Bronx to save their affordable apartments and neighborhoods from being displaced by highly profitable high-rise condominiums and hotels for the wealthy.

De Blasio is currently under attack by tenants, immigrants and other oppressed communities, as well as housing rights and social justice activists who are fighting racist gentrification around the city. Unsurprisingly, the Real Estate Board of New York, the top luxury developers’ lobby, has hailed the mayor’s policies. But to many New Yorkers, de Blasio is known as “the mayor of displacement, broken windows policing and corruption.”