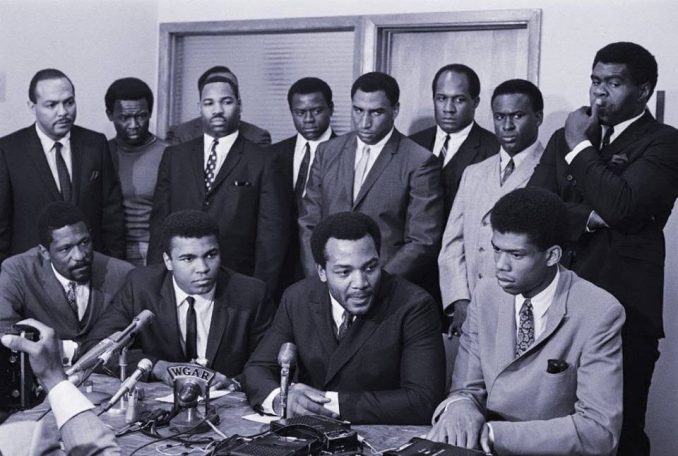 A historic summit was held in Cleveland 50 years ago in solidarity with heavyweight champion Muhammad Ali, to support his status as a conscientious objector during the Vietnam War, based on his religious beliefs. He faced jail time by the U.S. government.

As a Black man living under segregation and Jim Crow in Louisville, Ky., Ali knew that the U.S. military draft would send him to kill Vietnamese people. He refused to be inducted into the military on April 28, 1967, saying, “I have searched my conscience and I find I cannot be true to my belief in my religion by accepting such a call.”

A June 4, 1967, press conference followed this meeting of the minds in the battle of ideas, featuring Ali, other Black athletes and political figures. For a summit clip, go to youtu.be/XthuWLpTyk8.

Ali’s resolute defiance was also coupled with a deep understanding of U.S. imperialism and the role of its military.

Facing the loss of his heavyweight title and income while appealing his conviction for draft evasion, Ali never wavered as he spoke to thousands of anti-war activists to explain his refusal. “Clay aka Ali v. United States” was heard by the U.S. Supreme Court on April 19, 1967. A unanimous (8-0) decision in favor of Ali came down on June 28, 1971.

As a new generation of athletes boldly rises with their fists in the air, kneeling and speaking out, we are reminded that U.S. imperialism, and the system of racism, oppression and bigotry that is part of it, must be confronted, dismantled and abolished. Muhammad Ali, Presente!