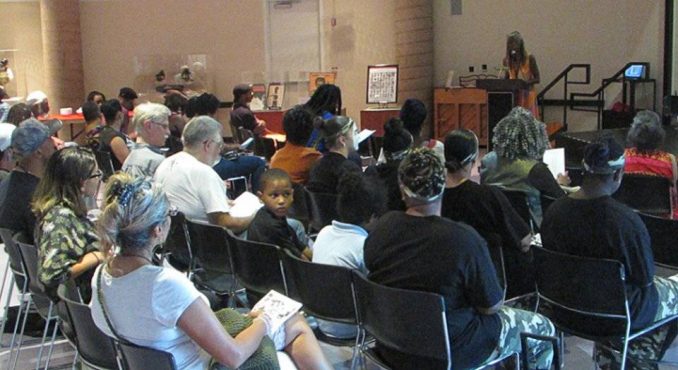 Over 60 people filled the Malcolm X Library and Performing Arts Center for a successful event commemorating Black August in San Diego on Aug. 30. When the call for this event was first issued by email from the San Diego International Action Center, questions arose such as “What is Black August?” and “Why August?”

Included in the message was a 1993 essay by Mumia Abu-Jamal entitled “Black August.’’ A sentence in it reads, “August, in both historic and contemporary African American history, is a month of meaning.” Mumia lists historic events and movements that unfolded in August and their participants, beginning with brothers George and Jonathan Jackson.

Individuals from the African-American community responded to the call for event organizers. Some were members of organizations, but most people joined in order to participate in a positive event for the community. The San Diego Black August Planning Committee was formed, and its members spent several weeks discussing many of the individuals and movements in Black history whose stories are connected with the month of August. The first challenge was getting out a flier that would spark an interest in Black August that centered on the truth about individuals and events in African-American history.

The committee met weekly, developing a program that was informative, educational and entertaining — and that highlighted Black movements and historical events that occurred in August. They chose George Jackson, Harriet Tubman, Huey Newton, the Move 9 and Emmett Till. Next, they selected a dynamic panel to speak on the meaning of Black August and the significance of commemorating it today.

Everything came together. With this writer chairing, the program began with a poem by a 7th-grade poet entitled “Black Is Beautiful.” There were written scripts using Mumia’s essays to focus on George Jackson, Harriet Tubman, Huey Newton, and the Move 9. Local singer Wilnisha “Trut7h” Sutton portrayed the voice of Harriet Tubman.

Kalif Price, local actor, author, storyteller and musician, was the voice of Mumia Abu-Jamal. The San Diego Gospel Mime Group T.R.U.T.H. performed an amazing, heartfelt piece on the legacy of Emmett Till entitled “More Than I Can Bear.” The first segment ended with another powerful poem entitled “Michael Brown,” written and read by poet Sylvia Telefaro, of African American Writers & Artists.

The event then broke for delicious, nutritious food prepared by committee members and supporters; the aroma filled the entire performance annex. Then the last and most important part of the program began — the presentations by the panelists and open discussion. The speakers brought everything together and discussed the events in Charlottesville, Va., that sparked activists to take down the Confederate statue in Durham, N.C., resulting in officials in many U.S. cities quietly taking down other monuments of intimidation.

Panelists took up the Aug. 19 Millions for Prisoners Human Rights March in Washington, D.C., which focused on the need to abolish the 13th Amendment, which still sanctions slavery in the U.S. Discussion topics included the school-to-prison pipeline, the prison-industrial complex, police brutality, the educational system, housing, unemployment and health care. Some steps proposed to resolve these issues included working together, taking control of our own destiny, supporting the Black Lives Matter movement, organizing, building coalitions and holding community forums like this one year-round.

Importantly, many youth were introduced to George Jackson for the first time. In closing, all participants agreed that this was the beginning of something significant. Stay tuned for the next Black August Planning Committee educational and informative community forum.