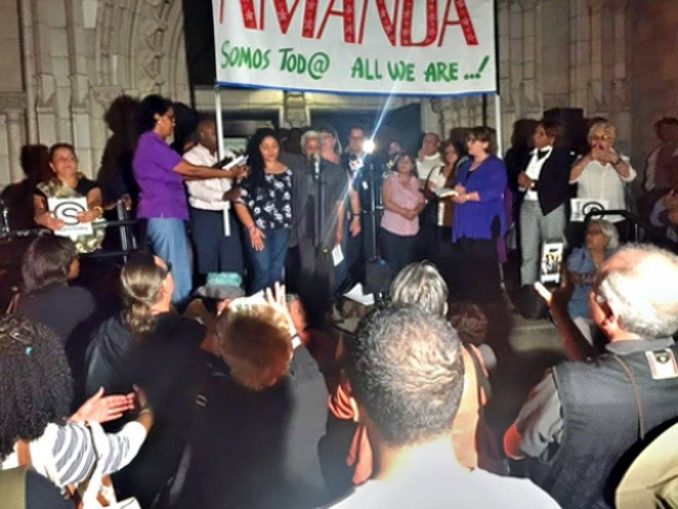 Over 150 people attended a rally in solidarity with Amanda Morales Guerra in New York City on Aug. 28.  Although she has lived in the U.S. for 13 years, Morales is fighting deportation to Guatemala by Immigration and Customs Enforcement.

Instead of reporting to ICE on Aug. 17, Morales sought sanctuary with her three U.S.-born children in the Holyrood Episcopal Church in Washington Heights in Manhattan. This courageous 33-year-old woman is the first undocumented worker to publicly take sanctuary in New York City since bigot-in-chief Donald Trump became president and intensified anti-immigrant policies.

With legal assistance, and the aid of community groups, immigrant rights advocates and elected officials backing her struggle to remain in the U.S., Morales was able to gain a 90-day stay in which to fight for her case to be opened by ICE and for her request for asylum to be granted.

At the rally, the Rev. Luis Barrios introduced local politicians, faith-based leaders and other speakers who stated they were in solidarity with Morales’ struggle to stay in the U.S. and keep her family together and safe. If she is deported, as speakers emphasized, there would be no one to care for her children. Rev. Barrios asserted that his church will continue to shelter her for as long as necessary.

Activists joined the rally from the church and the community, as well as from organizations, including the New Sanctuary Coalition and Haitian Women for Haitian Refugees.  The People’s Power Assembly and NYC Shut It Down! members marched over from a nearby People’s Monday for Kim Doreen Chase, an African-American, 52-year-old woman who mysteriously died in police custody in Baltimore on Aug. 20.

The chant of “¡Sí, se puede!” (“Yes, we can do it!”) reverberated throughout the rally, as the crowd vowed to keep on fighting for Morales and the rights of all undocumented workers.