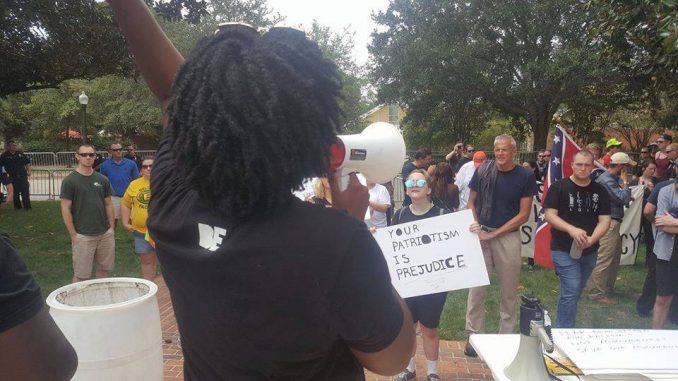 Roughly 30 to 40 white supremacists from the Pensacola/Escambia County area convened in Robert E. Lee Square in downtown Pensacola, Fla., on Aug. 26. They were there to protest the proposed removal of a Confederate statue that sits atop a large obelisk overlooking downtown. They held many signs defending their bigoted, racist views while standing around the statue for four to five hours.

They were not unmatched, however. At 9 a.m., over 130 counterprotesters also converged on Lee Square to demand the statue be removed and to run the white supremacists off. This counterprotest, led by communists and other leftists, was met with outright hatred and disgust from the right-wing reactionaries. They soon dropped their guise of “protecting their heritage” and began screaming racist slurs and epithets at the counterprotesters, mainly Black people.

One reactionary admitted in a heated argument with a counterprotester that he believed his life as a white man mattered more than any Black person’s life. That once again proved the ongoing battle over Confederate monuments goes much deeper than “heritage” or “honoring fallen soldiers” and is really about upholding white nationalism and white supremacy.

Another limb of white supremacy was at the rally: an overwhelming number of cops were standing by, in either uniform or plainclothes, and a SWAT team sat nearby, waiting.

Both the monument and the grassy area across the road where most of the counterprotesters assembled were heavily barricaded by metal gates. One cop from the local sheriff’s department wore a visible bracelet that read, “Don’t Tread on Me.” When asked about it, he got aggressive with counterprotesters, saying, “Don’t talk to me.” That once again showed how cops side with right-wing reaction, including white supremacy.

The opposing rallies proceeded largely without any issues until the end, when almost all the counterprotesters moved past the barricades en masse to defend counterprotesters who had already gone over to confront the white supremacist side. Tensions rose high, and more militarized police were brought in to “secure” the area.

At one point, a white supremacist, who was later revealed to be in the military, was apprehended and charged with battery after he attempted to attack a Black Muslim girl standing by the statue. A second white supremacist was arrested on Aug. 28 after a warrant was issued charging him with battery against a counterprotester.

At midday, counterprotesters took over Lee Square and the white supremacist rally, vastly outnumbering the reactionaries whose numbers had dwindled throughout the morning. This takeover, led by Black revolutionary organizer Haley Morrissette, resulted in leftist radicals from Workers World Party, anarchists and the Alabama Green Party all gathering together around the monument to demand its removal.

While one reactionary kept calling for re-segregation of schools, white supremacists failed to regain control of their rally. By the end of his harangue, only 16 white supremacists remained, while the number of counterprotesters still topped 100.

This was a victory for anti-racist, anti-fascist, anti-Confederate counterprotesters, most of whom were Black and Southerners themselves. This victory shows that many Southerners are trying to truly organize the South while removing all of its racist, white supremacist legacies and throwing them aside. The South is rising — this time with Black leftist revolutionaries leading the way.