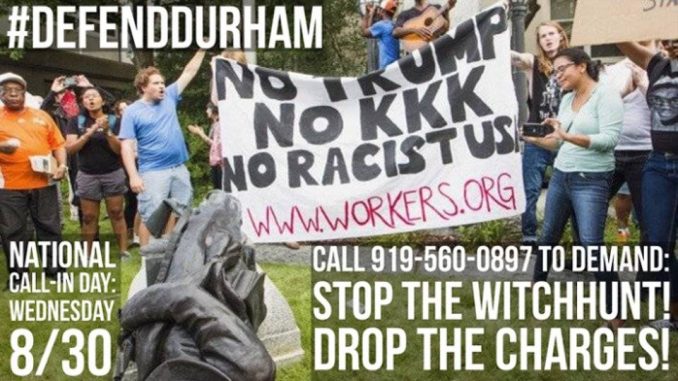 Aug. 29 — Over the past two weeks, 13 anti-racist activists have been arrested and slapped with outrageous felony and misdemeanor charges for their protest of white supremacy in the Durham community. The first charges were in relation to toppling the Confederate statue in front of the Durham courthouse on Aug. 14, and the second charges were for protesting in response to a planned Ku Klux Klan rally on Aug. 18. Most recently, three activists, issued warrants on Aug. 28, turned themselves in; two others were arrested the day before.

On an hour’s notice, some 40 people came to the Durham jail on Aug. 28 to support those turning themselves in. As the activists were led away to be processed, they chanted, “We see you; we love you.” This morning, the three appeared for their first court appearances and were given court dates of Sept. 12 and Oct. 11.

Members of the Durham community see these arrests as a form of retaliation against the movement at large. Sheriff Mike Andrews recently attempted to prosecute activists with the Inside-Outside Alliance on charges for protesting. Andrews’ attempt failed, and he was exposed for his exaggerated attempts to target demonstrators.

Andrews runs the Durham County Jail. This institution disproportionately cages Black and Brown people and is committed to the preservation and perpetuation of white supremacy.

Under Andrews’ tenure, at least five people — Matthew McCain, Dennis McMurray, Niecey Fennell, Terry Lee and Raphael Bennett — have died in the jail due to the criminal conditions there. Andrews has gone out of his way to cover up these deaths. He has made patently false statements about the jail’s conditions, while frustrating attempts by the community and elected officials to audit the jail’s operation.

According to the IOA Facebook page, “[T]his jail is trying to isolate our community members even more by reducing their in-person visitation slots by half in the last few years and, now, introducing ‘video’ visitation to take up the slack.” (tinyurl.com/ycpu8myd) The IOA has held weekly protests at the jail for more than a year.

Andrews has also lied about the Durham County Sheriff’s collaboration with U.S. Immigration, Customs and Enforcement.

Anti-racist activists are asking supporters to call Sheriff Andrews’ office at 919-560-0897 to demand that it end the witch hunt on activists protesting white supremacy and drop the charges against those already arrested.