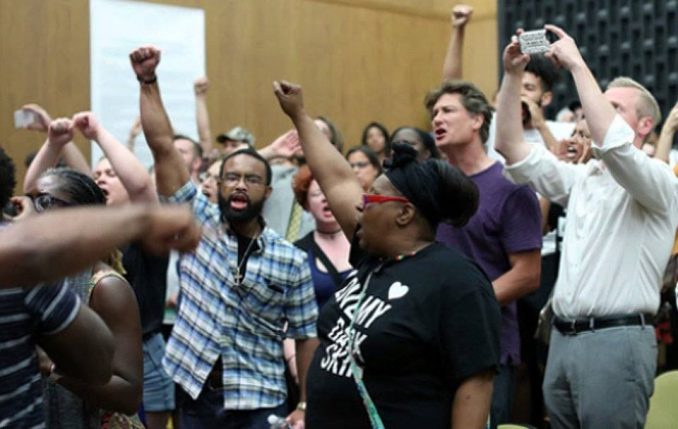 “We are face to face with History and quite simply we must not be afraid.”

These words were spoken by Comandante Che Guevara in 1961. Now, from Charlottesville, Va., to Durham, N.C., to Boston, the masses are rising to confront, expose and resist the upsurge of the neofascists, Ku Klux Klan and the various arms of the state and its apparatus.

Freedom fighters traveled on Aug. 11 and 12 to Charlottesville from across the U.S. to combat white supremacist hate masked in the legal cloak of the First Amendment “right to free speech.” The ensuing violent attacks and murder by white supremacists were seen across the globe and revealed a fact that we in Workers World Party have long known: The Klan, the police and the courts work hand in hand.

In the aftermath of death, trauma and brutality, Mayor Mike Signer and the Charlottesville Council members convened a hearing Aug. 21 to discuss their administration’s response to the racist, Islamophobic and anti-Semitic ultraright on Aug. 11 and 12. However, they quickly found out that it would not be “business as usual” and were faced with the fact that resistance was still in the air. 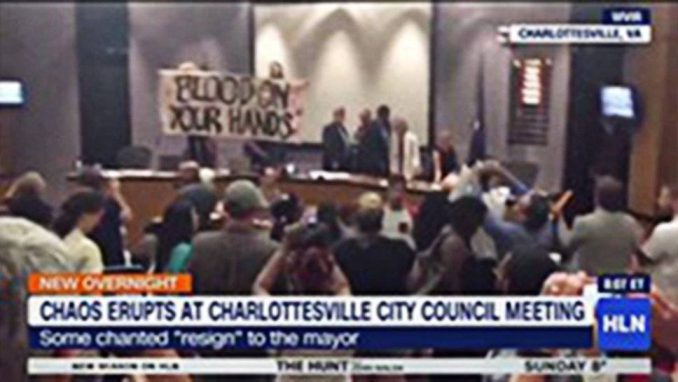 Over 100 community residents occupied the council chambers and chanted in unison, “Shame!” and “Shut it down!” Moments later, the police moved in to remove the protesters, who continued to demand to be heard, even as some were arrested. Then, from the upper decks of the hall, a banner was unfurled with the powerful and glaring message: “Blood On Your Hands.”

The blood, death and injuries are also on the hands of Trump and in the divisive, coded, racist rhetoric that the Trump administration addressed to its base.

An Aug. 21 New York Times article quoted Tracy Saxon, who was part of the people’s occupation: “I’m outraged! I watched my people get beat and murdered. They let Nazis here have freedom of speech, and they protect them? And we can’t have freedom of speech?” Another attendee, Paul Hurdle, said of the ultraright violence he experienced: “I am not the same person I was that day.”

As the mayor and council members cowered and then momentarily departed, the freedom fighters seized the meeting until authorities guaranteed the release of some who had been detained and charged with disorderly conduct, and also allowed them to voice their concerns.

Some in attendance went further and called for the mayor’s resignation and informed council members they can expect to be removed from office in the next election.

The hateful acts and words broadcast across screens and airwaves on Aug. 11 and 12 evoked memories of the Klan murder of African Americans in the 1960s: tortured Emmett Till and his open casket funeral, the four little school girls bombed in Birmingham, and the many days and nights of terror still faced by oppressed peoples in communities living under the shadow of the prison-industrial complex.

In his eulogy for the four school girls, Dr. Martin Luther King Jr. said, “We must be concerned not merely about who murdered them, but about the system, the way of life, the philosophy which produced the murders.”

Racism, bigotry and violence are deeply rooted in the founding and continued practices of the U.S., domestically and around the world. This is the system we seek to dismantle and abolish.

We carry forward the clarion call of Mother Assata Shakur: “It is our duty to fight for our freedom. It is our duty to win.” And as we heal, march and struggle: “We must remember to love and support each other.”