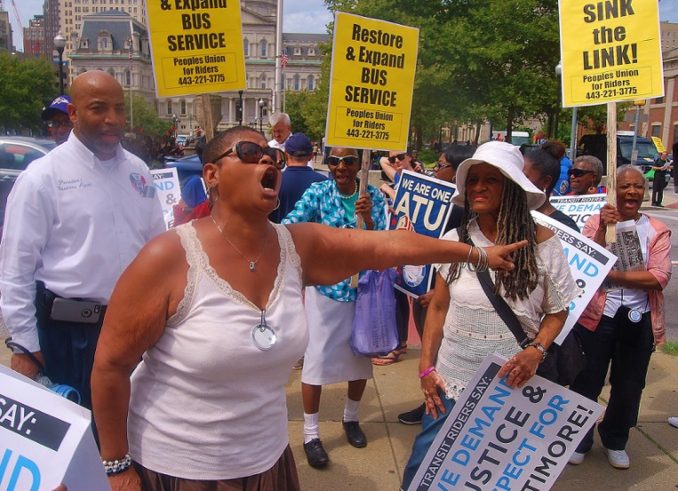 On Aug. 23, a group of 70 protesters marched in solidarity with the Amalgamated Transit Union and the People’s Union for Bus Riders, a group initiated by the People’s Power Assembly, in Baltimore.  They were protesting the recent changes made to the city’s public transportation system by Gov. Larry Hogan.

Joining together with local groups and organizations, members of the community marched to the governor’s office to make their demands known, and to show that the people of Baltimore do not want the BaltimoreLink system.

When asked about the inconveniences brought on by the BaltimoreLink, the president of ATU Local 1300, David McClure, stated: “It’s unfortunate that people are suffering … and he [Hogan] just threw it upon people. People are actually losing their jobs. He’s basically thrown the MTA into chaos.”

McClure went on to say: “You have elderly people who have to walk several blocks just to attain a service that used to be right in front of their door. I think it’s unfair.”

The majority of the community shares McClure’s views about the negative impact the Link system has had on the people of Baltimore.

Barbara Rock, a resident of Baltimore City, relies on public transportation to transport her from one destination to another. Rock stated: “It’s really hard for us seniors to walk and deal with these buses. We have to catch two or three buses to go where we have to go. It’s not right.”

Another community member, Michelle Fulmore, said that she depends on an enormous amount of medication in order to cope with her asthma and leg pain, among other health conditions. When asked what inconveniences the new bus system has caused her, she answered: “Heatstroke and more medication. I had to get another cane because the one I had, the leg wouldn’t hold up on it.”

Upon arriving at Hogan’s office, the protesters were stopped  by six police officers, who were blocking them from delivering their list of demands to the governor. Although they were met with opposition, the demonstrators were not disheartened. They stood outside the office building, raising their demands and vocalizing their thoughts about the unjust changes.

Even after the protest came to an end, members of the community still said strongly that the BaltimoreLink system will be brought down.