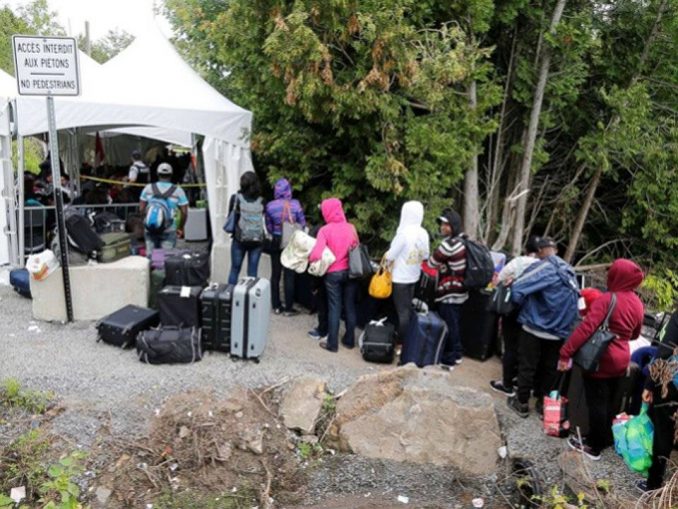 A line of asylum seekers who identified themselves as from Haiti wait to enter into Canada from Roxham Road in Champlain, New York, Aug. 7, 2017.

Thousands of Haitians are fleeing from the United States to Canada, fearing deportation back to Haiti once their temporary protected status runs out in January. Some 60,000 Haitians got TPS after the devastating earthquake in 2010 destroyed the Haitian economy and left around 300,000 people dead and hundreds of thousands severely injured.

Some of the Haitians crossing the U.S.-Canadian border are asylum seekers who were turned away from Brazil.

Almost none of the tens of thousands of homes the earthquake destroyed in Haiti have been replaced. There have been other recent blows to Haiti’s infrastructure.

Hurricane Matthew in 2016 annihilated much of Haiti’s agricultural production. The United Nations Office for Coordination of Humanitarian Aid estimated that Matthew severely damaged 200,000 houses and caused a major increase in food prices.

The tens of thousands of people of Haitian descent recently expelled from the Dominican Republic still have not been absorbed into the Haitian economy.

In the view of Mona Peralte, who wrote an Aug. 17 column for Haïti-Liberté, Donald Trump’s racist, anti-immigrant statements have panicked the fleeing Haitians. Though most of the U.S. president’s vicious diatribes are directed against Muslims and Mexicans, Haitians say that his blatant attacks on people of color very easily extend to them. U.S. Immigration and Customs Enforcement persecutes immigrants and much of the corporate media repeat his charges.

Since the beginning of June, some 6,500 Haitians have stealthily crossed the border between Rouses Point, N.Y., and Lacolle, Quebec. In the first two weeks of August, according to Canadian immigration, 3,800 people — the vast majority Haitian — crossed the border without going through customs.

When they cross, a French-speaking cop from the Royal Canadian Mounted Police meets them. The police detain them for a few days before they are moved to facilities in Montreal.

If someone crosses the border officially and requests asylum, a 2010 agreement between Canada and the U.S. requires that the person be sent back to the country where they first landed.

Richard Goldman, an immigration attorney with the Committee to Aid Refugees in Montreal, told the Aug. 17 Miami Herald, “The success rate for last year, 2016, was 50 percent, so you’re facing a very real risk of being refused.” The rate of refusal in the U.S. is much higher.

If Haitian citizens who are parents are deported to Haiti, their U.S.-born children, who are U.S. citizens, face a complex legal problem. Can they follow their parents to Haiti, or must they be returned to the U.S.?

A recent trip to Montreal by Haitian Minister of Foreign Affairs Antonio Rodrigue and the minister for Haitians living abroad, Stéphanie Auguste, had a public relations aspect, involving the Canadian government’s relations with the large Haitian community in Quebec. It also allowed the Haitian government to make clear how it will handle mass expulsions from Canada.