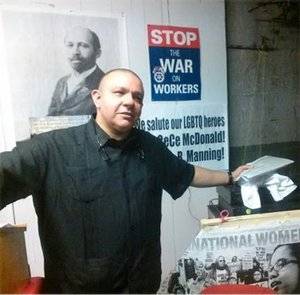 Detroit Workers World Party and the Moratorium Now! Coalition held a meeting Aug. 17 to defend the Bolivarian Revolution in Venezuela and the Cuban Revolution.

The meeting was opened by Elena Herrada, a longtime Chicana activist and member of the Detroit School Board in-exile. She recalled her trip to Venezuela with a delegation from the Detroit-led Welfare Rights Organization in 2006.

The featured speaker was Jesús Rodríguez-Espinoza, former consul general for the Venezuelan Consulate in Chicago. Four months ago, the U.S. terminated Rodríguez-Espinoza’s status and said he had to leave the U.S. or be declared persona non grata and expelled. The U.S. State Department has refused to reinstate his visa. Because of this, Rodríguez-Espinoza has been reassigned to the Ministry of Foreign Affairs in Caracas.

Addressing the meeting via video conferencing, the Bolivarian government representative gave an optimistic view of current developments in Venezuela. He reported that although the economic situation worsened in 2015 and 2016, his impression is that there is economic improvement today. There is still a crisis, brought on primarily by the drop in oil prices and the financial destabilization caused by U.S. imperialism and its allies, which has drained Venezuelan cash reserves. However, the availability of food and goods seems to be improving. The images of people dying from lack of medicine are simply untrue, he stated.

Rodríguez-Espinoza said the biggest problem is inflation. It is caused in large part by the “black market,” which is a product of the unfavorable exchange rate for Venezuelan currency caused by international attacks on Venezuela’s financial sector. This has led to speculation and hoarding of goods.

Rodríguez-Espinoza described the importance of the recent Constituent Assembly election. Some 8.1 million people voted, and with the right wing attempting to disrupt and prevent the vote, the 8.1 million were primarily Chavistas and constituted the largest Chavista vote ever.

The Constituent Assembly represents an effort to go past the traditional political parties, with direct representation by the communal councils, Indigenous population and workers. Rodríguez-Espinoza stated that as a Marxist, he views the Constituent Assembly as a move in the direction of deepening the revolution and transforming and advancing the political process in Venezuela.

Most importantly, Rodríguez-Espinoza affirmed how the election was a setback for the right-wing forces. Since the election, there has been a sense of peace and calm in Venezuela, with the opposition not currently capable of bringing people into the streets to create violence and disruption. Reports of dissension within the Venezuelan military were overblown, in his opinion, with the military still basically united in support of the Bolivarian revolution.

Rodríguez-Espinoza emphasized that the greatest threat to Venezuela is the direct threat of U.S. military intervention, as expressed by President Donald Trump. Vice President Mike Pence’s weeklong Latin America trip starting Aug. 13 was devoted at least in part to gathering support for such military intervention by U.S. imperialism.

Cuba and the ‘spirit of resistance’

Rodríguez-Espinoza said that U.S. military threats against Venezuela are deepening the spirit of resistance and anti-imperialism of the Venezuelan people, who for years have looked to Cuba as the example for defending their revolution against these types of threats.

He stressed the importance of solidarity from the progressive movement in the U.S. in defense of the Bolivarian Revolution and answering the U.S. ruling-class barrage of slanders against Venezuela. He mentioned how heartened he was by the enthusiastic response he received at the Workers World Party Midwest conference last March.

Rodríguez-Espinoza concluded by expressing the solidarity of the Venezuelan people with the movement against white supremacy and fascists within the U.S. He emphasized the importance of struggle to isolate and defeat the right-wing ideologues when they take to the streets.

A video of the Venezuelan presentation, with questions and answers, can be found at tinyurl.com/y8rf278c.

The meeting was also addressed by Tyler Vosgerchian and Koz Mo of Workers World Party, who went on trips to Cuba this summer. Vosgerchian, part of a delegation from Pastors for Peace, gave a history of that group’s defiance of the U.S. blockade against Cuba and discussed the history of relations of the church to the Cuban Revolution. Mo went on the 48th Venceremos Brigade. He emphasized the spirit of internationalism and solidarity with all oppressed people fighting imperialism that emanated from the Cubans he met, including a deep level of solidarity with the struggle of Black and Brown people in the U.S.

Anya Summers of WWP reported on the arrests in Durham, N.C., of freedom fighters who tore down a Confederate statue on Aug. 14, and urged people to make calls demanding all charges be dropped.