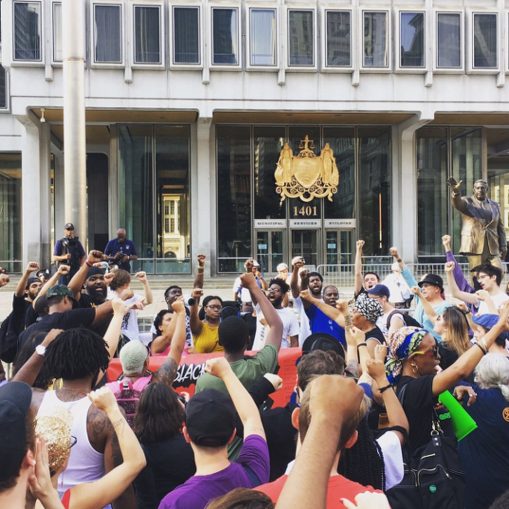 On August 21, spurred by white supremacists’ call for an action to defend the statue of former Philadelphia police commissioner and mayor, Frank Rizzo, over 250 people converged on the statue, joining with the growing movement across the country to remove Confederate and other white supremacist statues.

Philly for REAL Justice had organized a demonstration. Speakers from REAL Justice, Workers World Party and Philly Socialists, as well as Pam Africa of MOVE and the International Concerned Family and Friends of Mumia Abu-Jamal, exposed Rizzo’s role.

Rizzo remains infamous for his record of dividing the working class with the poisons of racism and fascism. A precursor to Donald Trump’s authoritarian, male-chauvinist persona, Rizzo embodied white supremacist thuggery. Rizzo famously bragged in the 1960s of his growing police force of 9,000 cops as strong enough to “invade Cuba and win.”

Technology eliminated millions of jobs across the USA and more were exported by globalization. Being “tough on crime” became politically useful as way to deal with the economy’s unemployed victims, many of whom were Black. Rizzo, a Democrat, was the icon of that racist, anti-worker movement, whose goal was more exploitation of the working class, including mass incarceration of the Black community and more police oppression.

Some 3,500 students and allies had gathered at the School Board to demand a Black studies program in Philadelphia Public Schools. Rizzo unleashed the violent cops into the crowd, beating Black youth, school board officials and ministers.

In 1966, Rizzo led raids on the Student Nonviolent Coordinating Committee, whom he claimed had “hoards of dynamite, guns and ammunition.” This proved to be false. In 1967, he would raid the offices and arrest leaders of the Revolutionary Action Movement (RAM) and later the Students for a Democratic Society (SDS) based on false accusations of terrorism.

Rizzo even said, “The Black Panthers should be strung up.” He attempted to annihilate the radical left, especially the Black Panthers. In 1970, Rizzo led a raid on multiple Panther offices just a week before the major Revolutionary People’s Constitutional Convention met. Rizzo’s cops carried out a full public strip search of Panther members, which would be published on the front page of the next day’s Philadelphia Daily News.

Rizzo had a tumultuous relationship with bourgeois and alternative media. Mumia Abu-Jamal, a prominent journalist and now political prisoner, consistently criticized Rizzo’s racist policies on public radio and in the press. To counter Mumia, Rizzo developed a police file on Mumia — over 800 pages long — of information gathered via wiretaps and other counterintelligence practices.

Police spying on government critics became even more common. Rizzo’s police created a list of 18,000 activists to keep intelligence on, most of whom were Black radicals like Mumia. This racist harassment and anti-Mumia sentiment would remain the cause of Mumia’s incarceration to this day.

Of course, one cannot mention Rizzo without mentioning his war against the Black Liberation organization MOVE. Rizzo brutalized MOVE, most notably in the 1978 showdown which raided the MOVE compound, leading to the arrest of the MOVE 9, who remain in prison to this day.

Although not in office in 1985, Rizzo can still be seen as guilty of helping to create the conditions of the MOVE bombing in May of that year. Philadelphia police dropped a bomb on the MOVE home, killing 11 members, including five children.

Because bourgeois legality doesn’t consider racism a crime, Rizzo’s connection to corruption, not his racism, led to his downfall from the favor of the ruling class. Rizzo’s police were later found guilty of widespread extortion, racketeering, bribe-taking, illegal gambling and theft of over $400,000 worth of cocaine from drug sellers.

How the movement grew

For over a year, activists in the organization Philly for REAL Justice have been organizing the #RizzoDown Campaign to remove Rizzo’s statue from Center City Philadelphia. This has been an active campaign of leafleting, petitioning, demonstrations and informational events to build awareness of Rizzo’s crimes.

Following the confrontation in Charlottesville, Va., and the toppling of a Confederate statue in Durham, N.C., activists have taken further steps to remove Rizzo. On Aug. 17, someone spray painted “Black Power” on the statue and wrote “Black Community Control of the Police” on the ground.

Diop Olugbala, leader of the Black Community Control of the Police campaign, was arrested, charged with painting the statue.

Impelled by the popular movement, progressive politicians called for the statue’s removal. City Council member Helen Gym subsequently tweeted, “All around the country, we’re fighting to remove the monuments to slavery & racism. Philly, we have work to do. Take the Rizzo statue down.”

On Aug. 18, someone threw paint on a major mural in south Philadelphia depicting Rizzo. One person was arrested for this.

Mayor Jim Kenney has planned to call for a public art commission to determine whether or not the statue should be removed. The question remains, how will this 2,000 pound bronze statue come down — by people’s power or government board? Either way, the movement against white supremacy will continue.

Sources for this article included “From Workshop to Waste Magnet: Environmental Inequality in the Philadelphia Region,” by Diane Sicotte, 2016, and “Protectors of Privilege” by Frank Donner, 1992, University of California Press.