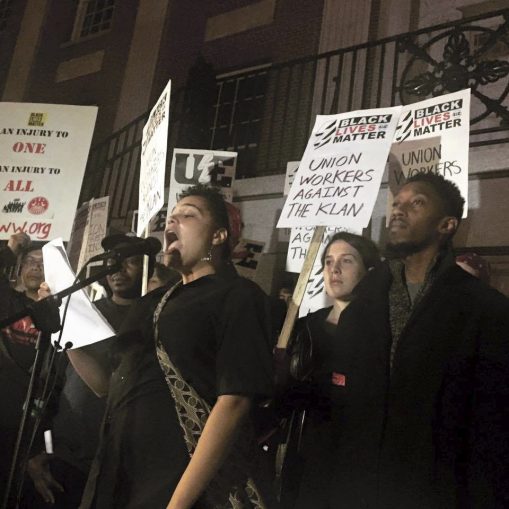 Labor unions, especially those representing education, health care and public service workers — whose members are a majority women and people of color — were swift to condemn the racist, fascist violence in Charlottesville, Va.

The American Federation of Teachers, representing more than 1.6 million education workers, including teachers and other staff, issued a statement Aug. 12 condemning the fascist killing. The statement called it “a dark turning point for our country” and encouraged its members to participate in protests and vigils around the U.S.

The AFT stated: “This type of domestic terrorism has pilloried communities of color, Jews and other marginalized groups throughout history. … Friday’s torch-light march showed that white supremacists are so emboldened that they don’t even feel the need to wear hoods. The violence directed at counter-protesters was meant to instill fear in the hearts of people who are fighting for a more inclusive [U.S.]. … This is a significant moment, and we must act now.”

The union also noted: “As students go back to school this year, they’re going to be afraid. For too many, this type of racism, anti-Semitism and homophobia will replicate itself in our communities and on our playgrounds. It’s left many of us educators determined to discuss this with our students.”

On Aug. 13, the AFT and more than two dozen leaders in its Higher Education Division issued another statement in which they hailed the counterprotesters who “did the work of bending the arc of history toward justice. We send them our solidarity and our support, our admiration for their bravery, and our commitment that we will be with them throughout whatever is to come.”

The union leaders decried Trump for his racism and bigotry and demanded members of the administration “correct their course. They must reflect on their role in normalizing racism through statement and policy, and on their responsibility in creating the sense of moral license that enabled racist terrorism to manifest itself in the streets of Charlottesville and on the grounds of the University of Virginia.”

‘We cannot be silent’

Service Employees International President Mary Kay Henry issued a statement Aug. 12 on behalf of the union, which represents almost 2 million health care workers in the U.S. and Canada: “SEIU members condemn the violence spread by white supremacists in today’s deadly terror attack. Our hearts are heavy with grief for the families who are now dealing with the death or injury of a loved one.

“This tragedy is a reminder that … we have yet to address the long legacy of racism and slavery that is deeply embedded in our history and experienced in our present day. We cannot be silent and must speak out against the violence and intimidation we have seen in Charlottesville and far too many other cities. Working people must, and we will, join together and organize our communities to eliminate racism at all levels and create a world where everyone, no matter the color of their skin, can participate, prosper and reach our full potential.”

National Nurses United also condemned the fascist violence in Charlottesville. NNU Executive Director RoseAnn DeMoro emphasized, “As a society, it is incumbent upon all of us to forcefully repudiate all expressions of white supremacy, racial hatred, and bigotry. Anyone familiar with the history of how white supremacy has stained our nation … cannot be surprised that continued expressions of that virulent philosophy would lead to violence today.

“All … elected leaders,” said DeMoro, “starting in the White House, have a responsibility to condemn racial hatred and the violence it encourages, and disassociate from those promoting it.” The union leader praised those who took a “a stand for cultural diversity and understanding among all people. We have a long ways to go to assure the equality, civil rights and civil liberties of all our people. There’s no time to waste.”

The national officers of the United Electrical Workers, representing some 35,000 workers in manufacturing, public sector and private nonprofit sector jobs, issued a Facebook statement condemning white supremacy and neo-Nazi attacks, and promising “to continue organizing in our workplaces and communities to fight racism, fascism and bigotry.”

The statement goes on: “UE stands with the people of Charlottesville and all of their allies who marched against the bigots and bravely stood up to hatred, racism, and violence. Our union was founded on the principles of equality for all — regardless of who you are, where you came from, or what you believe. UE local leaders and members enforce these principles in our workplaces and communities every day. We reject Trump’s pandering to white supremacists and hatred which is contrary to the core principles of UE. [We]will fight like hell to stamp out the scourge of racism, bigotry, and hate.”

Many local unions around the country took this opportunity to take a stand for social justice and urged their members via texts and email to join in protests against white supremacy and racial hatred in their cities and communities.